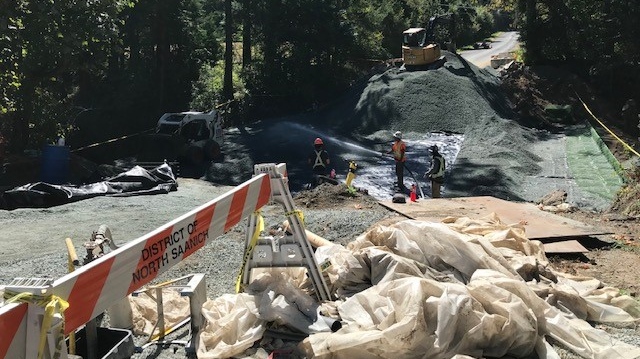 Work is underway to repair a damaged North Saanich, B.C., road and restore the fish-bearing Chalet Creek to a better state than it was before November's flooding. (CTV News)

Last November, massive storms washed out Chalet Road in North Saanich, B.C., closing it for the past nine months and filling a fish-bearing stream with debris.

Work is now underway to repair the damaged road and restore Chalet Creek to a better state than it was before the flooding.

Once complete, it will make it easier for salmon and trout to reach fresh water and spawn.

"The culvert was re-designed to support fish passage," says Ben Martin, director of infrastructure services for the District of North Saanich. "But also [to] have a high level of climate resiliency in terms of handling larger flows."

The extensive makeover of the storm-ravaged area will feature an arched culvert with an open, fish-friendly bottom and an overflow bypass channel that will divert water in the creek when it rises to a certain level, thus protecting the new habitat.

Other features include a mix of stumps, logs and pools which will help the fish survive in their habitat, creating places to spawn, hide from predators and shelter from the sun.

The restoration is a collaboration between the District of North Saanich and the Peninsula Streams Society, along with support from the Pacific Salmon Foundation and the Tseycum First Nation.

"We’ve been working with schools and local stewards for decades now to bring fish back to this creek with varying levels of success," says Ian Bruce, executive coordinator for the Peninsula Streams Society.

“The work that’s being done now as part of the culvert replacement project includes improving more access for fish downstream.”

Bruce says the wall of water that came down the creek during last November’s flooding flattened all the vegetation and moved rocks and concrete slabs weighing half a ton or more downstream.

The professional biologist has spent most of his life working with aquatic environments throughout Vancouver Island. He has been working on Chalet Creek for 25 years and is optimistic that salmon and trout will return in greater numbers than ever before.

“Now we are going to be dealing with some of the chokepoints, which are at the mouth of the stream, and getting those fish up past that point and into the creek,” says Bruce. 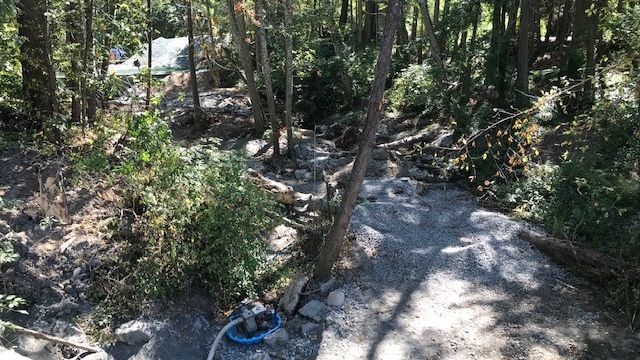 Besides being ecologically sensitive, the site is also part of a First Nation archeological protection area. Millennia Research Ltd. and the Tseycum First Nation have been monitoring the restoration project.

The upgraded area is about 250 metres long, spanning from above Chalet Road to Deep Cove.

The contract to repair the road was awarded to Northridge Excavating Ltd. for $582,000, while the total cost of repairing the initial storm damage and restoring the area will be closer to $750,000, according to the North Saanich's infrastructure director.

Work is expected to be completed by the beginning of September, just in time for fall spawning.

"My hopes are that we will have a great community project that will have fish," says Bruce.

"We’ll be able to bring the school students down and the community and they will feel proud what they’ve done to help contribute to that fish population and the habitat that’s here."

Three candidates out, Danielle Smith ahead with 41.7 per cent in Alberta UCP race

Following an hour and a half delay, the United Conservative Party is releasing the results of its leadership vote on Thursday.

An attacker with a large kitchen knife killed two people and wounded six others in stabbings along the Las Vegas Strip before being arrested Thursday, police said.

The number of recorded storm-related deaths has risen to at least 101 in the eight days since Hurricane Ian made landfall in southwest Florida.

Hunters who use a brand of climbing sticks intended to help them scale trees should stop immediately, Health Canada reports in a consumer product recall alert.

Judy Tenuta, a brash standup who cheekily styled herself as the "Goddess of Love" and toured with George Carlin as she built her career in the 1980s golden age of comedy, died Thursday. She was 72.