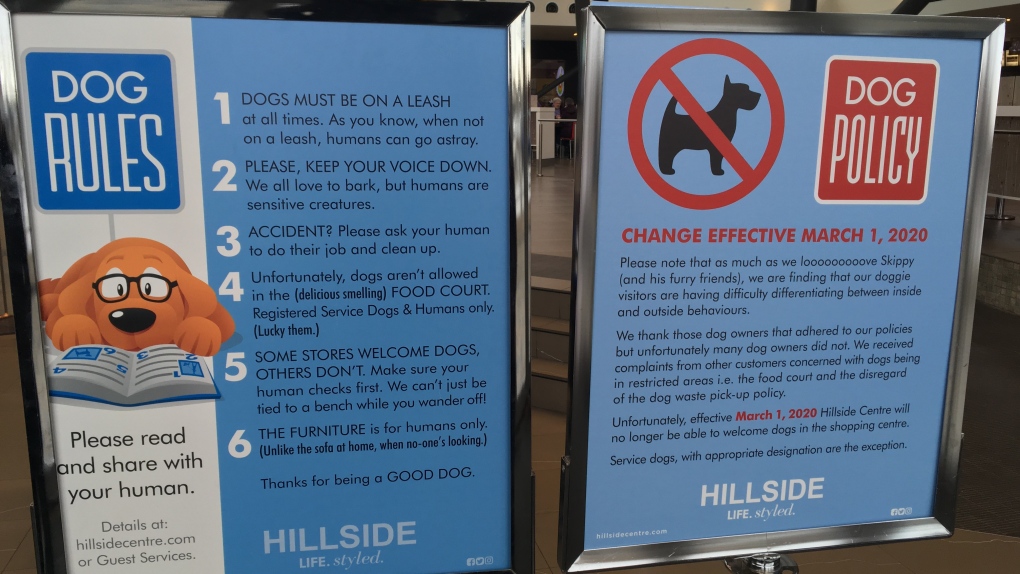 As of March 1, Hillside Centre will no longer welcome dogs to come inside with their owners. Signs posted inside the mall attribute the change to guests failing to follow the rules set out for canine visitors. (CTV)

VANCOUVER -- A Victoria shopping centre is ditching its canine-friendly policy after complaints that the mall environment had gone to the dogs.

As of March 1, Hillside Centre will no longer welcome dogs to come inside with their owners. Signs posted inside the mall attribute the change to guests failing to follow the rules set out for canine visitors.

"We are finding that our doggie visitors are having difficulty differentiating between inside and outside behaviours," reads the sign, the text of which is also posted on the Hillside Centre's website under the heading "dog policy."

"We thank those dog owners that adhered to our policies, but unfortunately many dog owners did not," the message continues. "We received complaints from other customers concerned with dogs being in restricted areas, i.e. the food court, and the disregard of the dog waste pick-up policy."

Designated service dogs are the exception, the shopping centre says.

Shopper Sean Cooper said Sunday that the change meant he would be less likely to shop at Hillside in the future. He said his family has brought its dog to the mall many times, since the animal gets anxious when left home alone.

"Summertime is going to suck, because we like to bring our dog here," Cooper said. "We didn't have to leave him in the car."

Cooper added that he understood the rationale behind ending the policy, a sentiment echoed by most of the people CTV News Vancouver Island spoke to at the mall on Saturday.

"If owners aren't going to be responsible and clean up after themselves, they just ruined it for everybody," said one woman who didn't give her name.

Another shopper, Heather MacLennan, said she didn't bring her dog to Hillside Centre because she knows it doesn't do well in crowded, chaotic environments.

"I personally wouldn't bring my dog into the mall because there's so many different people and, you know, different things that can come through the mall that could get my dog sick," Lovan said. "I'd rather just leave him at home or take him to the park if I wanted to take him out."

CTV News reached out to Hillside Centre for additional information on Sunday, but did not receive a response.