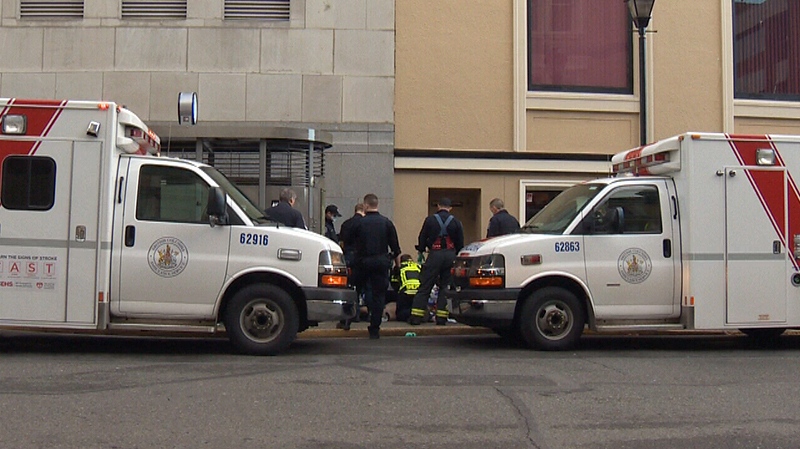 Paramedics try to revive a 41-year-old man suffering from an overdose in Victoria on Feb. 16, 2017. (CTV News)

VICTORIA -- Four Vancouver Island communities are among the recipients of provincial funding to help combat the overdose crisis in B.C.

In total, 24 municipalities across the province have received up to $50,000 to prevent drug deaths, including Victoria, Langford, Port Alberni, Campbell River and nearby Alert Bay.

The funding is being used to help support specific projects in each community, like a youth harm reduction and wellness program in Port Alberni. Meanwhile, other projects include reducing the stigma around substance use, engaging and empowering people who live with substance abuse and overall support.

"We are incredibly proud to be one of 24 communities selected for this grant," said Port Alberni Mayor Sharie Minions. "The City of Port Alberni works closely with the community action team to provide supports and resources dedicated to community-based harm-reduction services."

In 2019, overdose deaths linked to illicit drugs in B.C. dropped by roughly 36 per cent compared to 2018. In total, 981 people died of suspected overdoses in the province, representing an average of 2.7 deaths a day.

While the decrease in overdose deaths is a promising trend, the province's chief coroner Lisa Lapointe says that B.C. needs a safer, regulated drug supply to help curb overdose deaths.

The B.C. government says that it is ramping up its response to the overdose crisis in the province, and that it plans to spent approximately $746-million into overdose harm reduction and recovery initiatives of the course of 2017 to 2023.