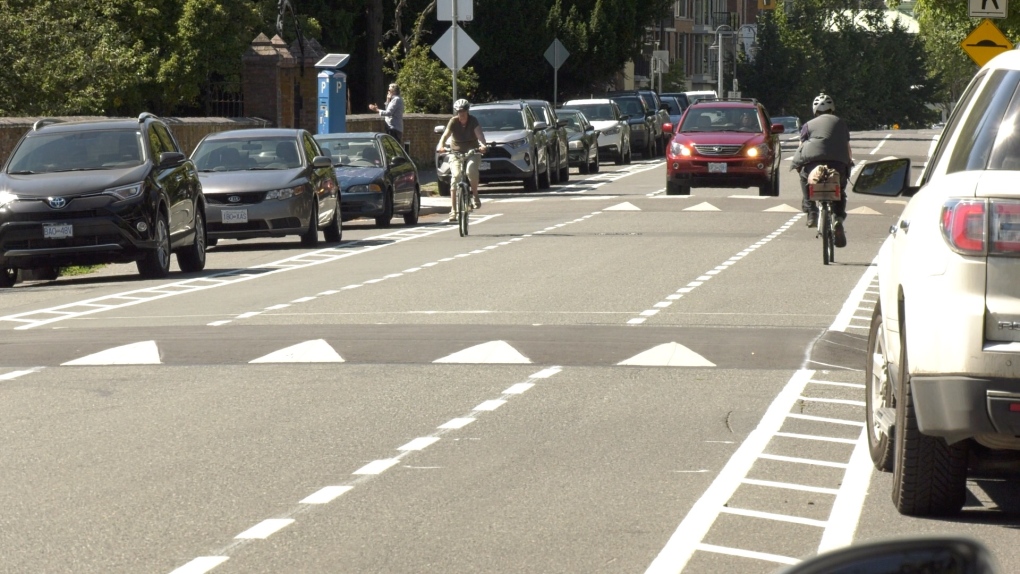 The new traffic pattern on Humboldt Street, which allows for two-way traffic in the single lane, is confusing some Victoria motorists: (CTV News)

VICTORIA -- A new traffic pattern on Humbolt Street is causing confusion for some drivers in Victoria.

The stretch of road between Blanshard and Quadra streets has been re-painted with a single lane for two-way traffic, sandwiched in between two bike lanes, with on-street parking on each shoulder.

Signage has gone up stating that when two vehicles approach each other, they are to take the bike lane, while also yielding to cyclists.

“I was totally confused, and saw somebody came around the corner earlier and she just had this wide-eyed look on her face,” one driver, Erin Skillen, told CTV News.

The Greater Victoria Cycling Coalition admits that the new design can seem confusing at first, but says it actually works.

“In terms of the on-the-ground experience, so far my experience is, I’ve been just fine with it,” said cycling coalition board member Edward Pullman.

According to the City of Victoria, this new design is part of its all ages and abilities bike network.

A statement from the city’s engineering department states that Humbolt Street is similar to other residential streets with low traffic levels where motorists yield to each when other vehicles are parked on both sides of the road.

“The street is very wide and can accommodate the painted lanes that are a visual reminder to motorists to watch for cyclists,” said Sheldon Johnson, spokesperson for the City of Victoria.

“Additionally, the speed bumps and lower speed limits create a safer neighbourhood roadway for all residents.”

The speed limit on Humbolt Street between Blanshard and Quadra streets is set at 30 km/h.