New apartment construction in Esquimalt to include 'deeply affordable' units

New apartment construction in Esquimalt to include 'deeply affordable' units 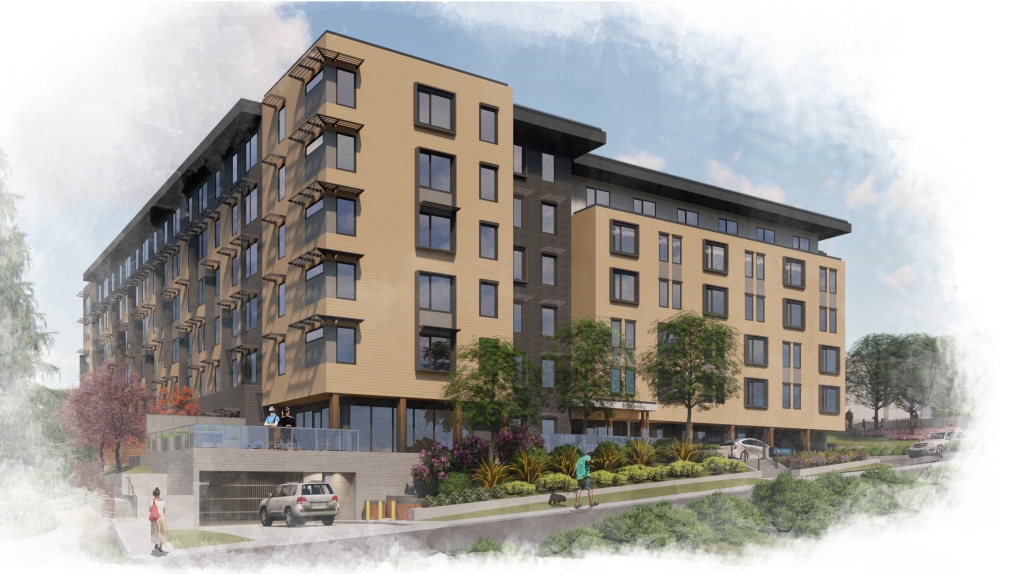 Construction is underway on 137 new rental suites for low- and middle-income residents in Esquimalt, B.C.

The federal and provincial housing ministers joined Esquimalt Mayor Barb Desjardins Wednesday to announce more than $20 million in funding for the project at 874 Fleming St.

The six-storey, wood-frame building will include five three-bedroom and six four-bedroom units to accommodate families, according to a release Wednesday from the federal Ministry of Housing and Diversity and Inclusion.

The new build replaces an existing apartment building on the site. The federal government says all tenants of the original building were relocated to other housing in the community and will have the right of first refusal to rent in the new building.

The federal government is contributing $6.4 million for the new build while the province is kicking in $14.5 million.

Developer Lapis Homes donated $60,000 and Vancity Savings Credit Union provided $19,500 in seed funding and a predevelopment seed loan of $350,000, according to a statement Wednesday from the federal Ministry of Housing and Diversity and Inclusion.

Once complete, the building will be operated by the Greater Victoria Housing Society.

"Our government is dedicated to helping those in need, which is why we are proud to invest in the redevelopment of this apartment complex in Esquimalt," said federal Housing Minister Ahmed Hussen.

"With nearly 140 units to support families, this project will play a vital role in providing housing options for those in need in the community."

A previous version of this story identified Mitzi Dean as B.C.'s Housing Minister. In fact, she is the Minister of Children and Family Development.

Transport Minister Omar Alghabra told the House of Commons transport committee the COVID-19 pandemic and resulting labour shortages are to blame for the significant wait times at Canadian airports, and said the ArriveCAN app is here to stay.

Members of a Freedom Convoy-affiliated group remain at an Ottawa church one day after the owner of the historic property moved to evict them over unpaid rent.

A new report from the U.S. Centers for Disease Control and Prevention says routine cleaning and disinfection may have helped two monkeypox patients limit the amount of contamination in their home.