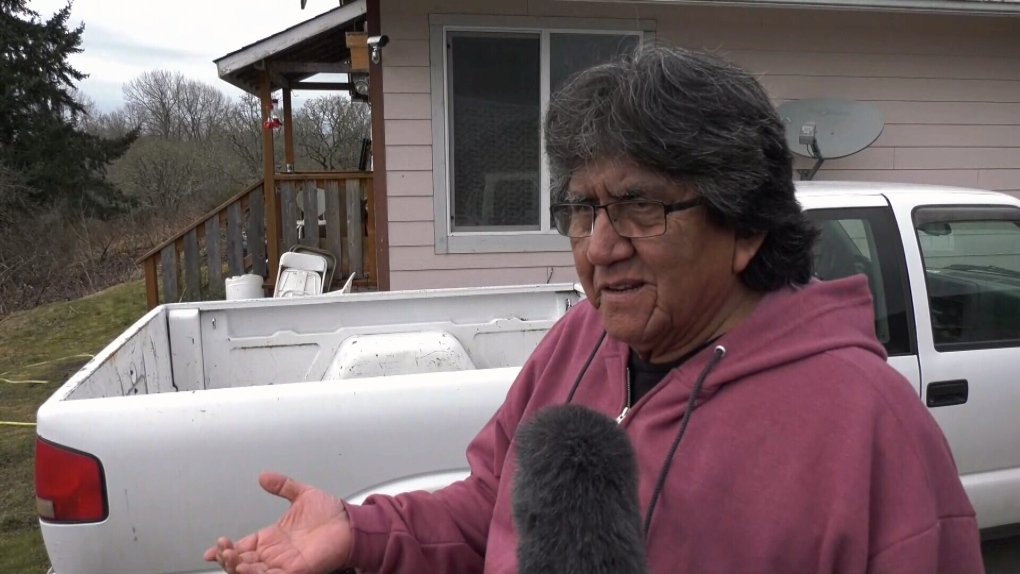 Phillip Joe, a retired logger and neighbour of Anderson Joe, says his home has come under attack. (CTV Vancouver Island)

A high-profile animal cruelty trial in Duncan is sending shockwaves through a Cowichan Valley community.

A neighbour of one of the co-accused says his home has been the target of gunfire and even a grass fire as public anger over the neglect and death of Teddy the dog mounts in the small First Nations community.

“It’s getting out of hand,” said Phillip Joe, a retired logger and neighbour of Anderson Joe, who has pleaded not guilty to charges of failing to provide for an animal and causing unnecessary pain or suffering to an animal.

The neighbour said he was at home washing dishes Monday night when he saw four men standing near the back of his home.

“I looked again and they were walking away pretty fast,” Joe said.

Moments later he looked up to see “a whole wall of flames.”

He called 911 and then ran outside.

“I took out a hose and tried to hose what I could but the hose wasn’t even doing any good,” he said. “It’s an ongoing thing because of a dog.”

Standing next to what appeared to be a bullet hole next to his bedroom window, Joe said he was awoken last month by three loud bangs.

“This happened like 1:30 in the morning,” he said. “I heard two bangs and then the third one I heard hit the wall. I got up right away and shut all the lights off and everything and then I could hear the vehicle leaving.”

“Yesterday when I saw how close that fire came to destroying two homes — and both of them are elders’ — I became very angry,” Seymour said.

He said that threats against his community are nothing new for the Cowichan Tribes, but added that the recent spate of violence is troubling.

Insp. Chris Bear of the North Cowichan-Duncan RCMP said the fire investigation is still in its infancy and police are waiting to speak with more witnesses.

“All I want is for this to settle down,” said Joe. “The young guys around here are talking about retaliating and that but I said, ‘Don’t do that. It just puts coal to the fire.’”

Local animal welfare group United For A Paws issued a statement Wednesday saying it is opposed to violence of this kind.

“We are not assuming this is vigilante justice until a thorough police investigation is done," the organization said. "Our group does not condone this type of behaviour and this case has been highly publicized for over a year with no incidents of this sort to date.”

Anyone with information about the fire can contact the North Cowichan-Duncan RCMP at 250-748-5522.