Langford is among B.C.’s fastest growing cities and is known for greenlighting developments and having relatively affordable housing that attracts young families.

But not everyone’s happy with the direction the city is headed.

The candidates are running on a platform of change for the city and its council, which has seen little turnover in the past three decades.

"We need to have fresh voices, we need new perspectives,” said 25-year-old Harder on Thursday.

Langford Now says more candidates will likely be introduced soon, including a possible one for mayor. 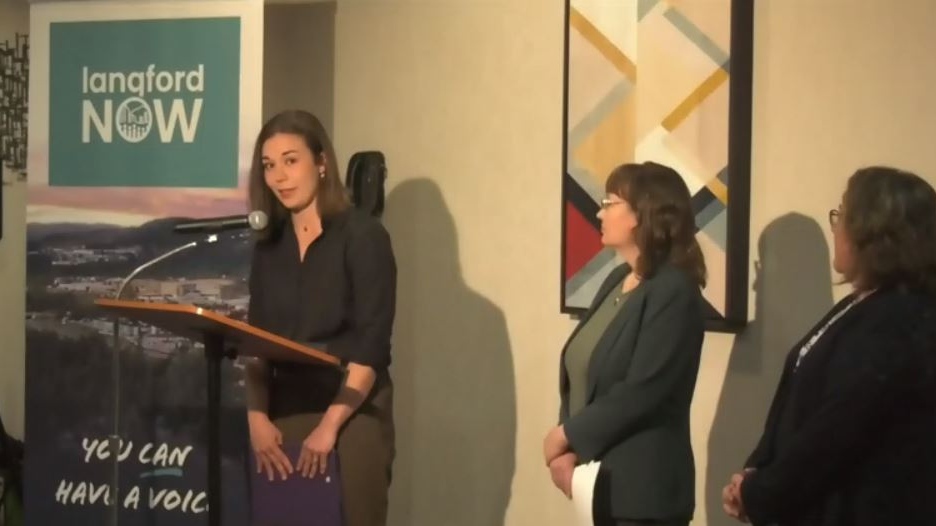 The group and its candidates decry the pace of development in the city and think there needs to be more public consultation before major projects begin.

The political group also says development work should be done in a more environmentally sensitive way, and that the city’s infrastructure hasn't adequately kept up with its population growth.

"We have seen a lack of amenities to go along with development," said Harder.

Harder has lived in Langford her whole life and Stew Young has been the mayor there the entire time, since before she was even born.

She notes the low voter turnout there — just 18 per cent in the last civic election — was the second lowest out of any municipality in B.C.

In that election, there were only seven choices for six council spots, and only one person running against Young for mayor.

"I believe that it means that we have to provide more choices," Harder said Thursday.

David Black, a professor at Royal Roads University, agrees that having more candidates is clearly a good thing for democracy and voter engagement.

Young has been mayor for 29 years and likes Langford just the way it is. He says development is good for jobs and the economy in the region.

"Do I think there’s anything wrong in Langford? Absolutely not," he said Thursday.

The longstanding mayor won’t confirm yet if he’s running again in the October 15 municipal election, but on Thursday he sounded like he was preparing to defend his record.

"Sounds like a man who isn't going to put up with these people who are saying such negative things about Langford," said Young.

"Bring it on, democracy is strong in Langford," he said when discussing the challengers to the status quo.

We’ll know in four months if Langford residents want a change to that status quo when they go to the polls.

The Canadian men’s national team are losing 3-1 in their FIFA World Cup match against Croatia on Sunday, a game where they must pick up at least one point or risk elimination. CTVNews.ca will follow the match live.