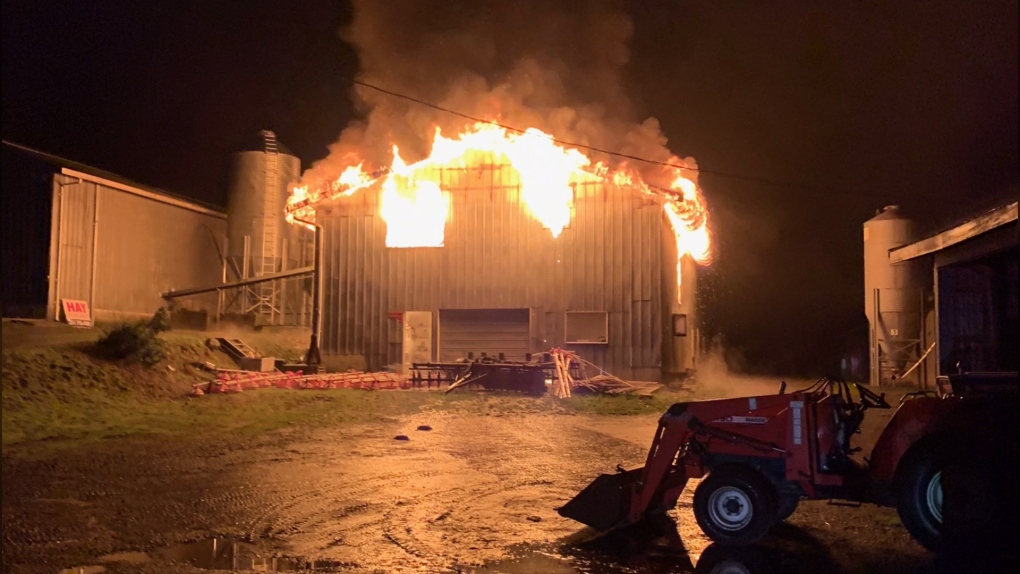 The fire broke out on Sunday evening: (Submitted)

VICTORIA -- Thousands of hens perished in a barn fire in the North Cowichan area over the weekend.

According to local company Farmer Ben’s Eggs, the fire broke out on its property at 1820 Herd Rd. on Sunday evening.

The family-owned company says it received a report from a passerby that a structure in the back area of the property appeared to be on fire around 9:10 p.m.

When firefighters arrived, the barn was "fully engulfed," according Farmer Ben’s Eggs.

The company says that firefighters were able to stop the fire from spreading to other buildings. However, the barn and the nearly 9,000 chickens inside could not be saved.

"The barn housed 8,800 layer hens and, unfortunately, we were unable to save them," reads the social media post, released Monday.

"As farmers we care deeply for our animals and losing them is devastating to us as a family."

Jennifer Woike, marketing manager for Famer Ben’s Eggs, told CTV News that the death of the chickens has been difficult for everyone involved.

"It’s pretty hard when you farm for a living and you have animals–it’s pretty hard to deal with loss in any way, shape or form," she said. "But when you deal with a loss on this kind of magnitude, it’s definitely, it hits everybody at home."

Woike’s husband, Ian, who is a co-owner of the business with his father, says the outpouring of support from the community has been incredible.

"Our customers, our family and friends have reached out to us today in support," he said. "I just want to say thank you from the family and that we really appreciate it."

The company also thanked all first responders for their help with managing the fire, including the Maple Bay, Crofton North Cowichan and Chemainus fire departments.

The family says the best way to support them is to keep buying their eggs at your local store.

None of the company’s 12 employees will lose their jobs due to the fire. Woike says the business had already streamlined how they operate due to COVID-19, meaning there will be no impacts to their workers, and hopefully customers.

The cause of the blaze is unknown at this point and is still under investigation. Due to the extent of the damage, they may never know, says Woike.

The family has insurance and plans to rebuild the barn over the next 12 to 24 months.