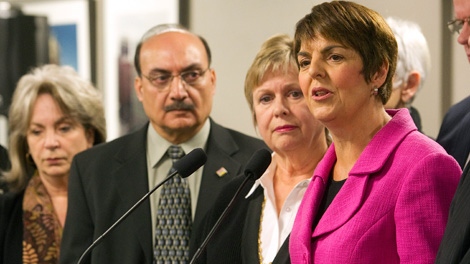 BC NDP Leader Carole James (right) is flanked by BC NDP MLAs (from left) Sue Hammell, Raj Chouhan and Dawn Black during a press conference in Vancouver, December 2, 2010. (CP/Richard Lam)

VICTORIA -- The New Democrats will nominate a longtime member of the B.C. legislature to serve as Speaker.

Premier John Horgan says Raj Chouhan, who represents Burnaby-Edmonds, will be put forward on Monday as the party's choice for Speaker when the legislature resumes sitting.

Before entering politics, Chouhan was the founding president of the Canadian Farmworkers' Union and was the director of bargaining for the Hospital Employees Union for 18 years.

If he is elected by legislature members to serve as Speaker, Chouhan will replace Darryl Plecas, who did not run in October's provincial election.

Chouhan was the legislature's assistant deputy Speaker before the election.

This report by The Canadian Press was first published Dec. 2, 2020.