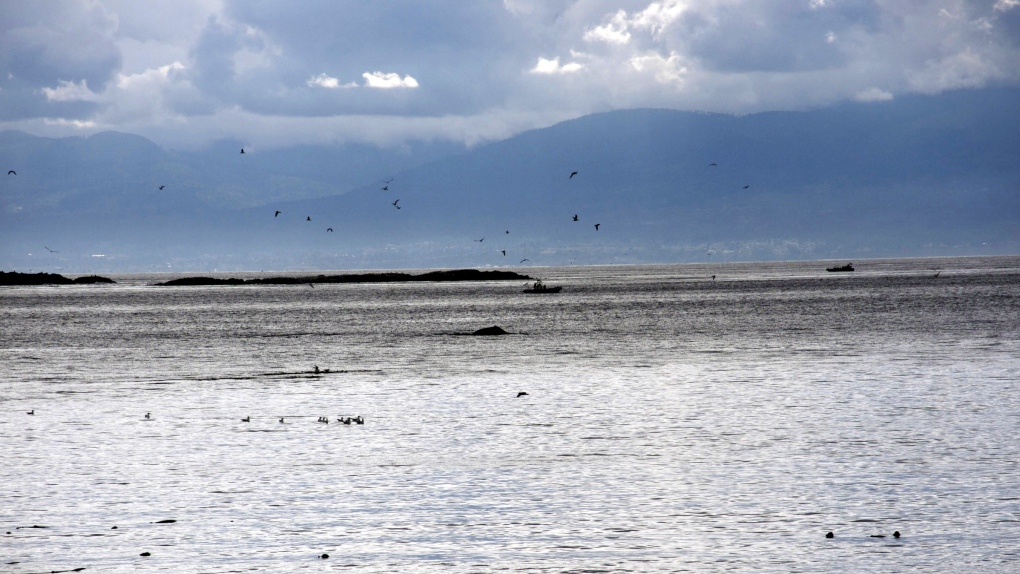 A baleen whale breaches the water surface inside the two-kilometre radius of the Bentinck Island demolition range while a navy sentry boat tracks the whale’s position. (Royal Canadian Navy)

The Royal Canadian Navy is warning the public to avoid the area around a small island southwest of Victoria next week as sailors conduct explosive demolition training in the Strait of Juan de Fuca.

The navy has been setting off explosives at the test range on Bentinck Island, the site of a former leper colony, for nearly 70 years. The navy says the training is critical to ensure its members can achieve and maintain operational readiness ahead of deployment.

Residents near the island will likely be unaware of the explosive testing except when weather conditions allow the sound to travel ashore, the Department of National Defence and the Royal Canadian Navy said in joint a statement.

The navy stepped up its marine mammal protection measures around the island in 2017 in response to complaints from the Pacific Whale Watching Association and local tour operators who were concerned the explosive blasts were harming orcas and migratory whales in the area.

In a meeting with the groups, the navy agreed to halt detonations when marine mammals were spotted within two kilometres of the island, and limit the weight of explosives used from 2.25 kilograms to 1.13 kilograms.

The military says it will have expert third-party observers on site during the demolition testing to advise when the range is clear of orcas and whales.

"Events are delayed if whales are observed in or transiting towards the range, and activities do not re-commence until the marine mammal observer provides the all-clear," said the navy and National Defence.

Staff at the nearby Race Rocks Ecological Reserve have reported frequent humpback whale encounters this month at the site, which is less than a kilometre from Bentinck Island. Personnel also reported four sightings of transient orcas passing between Bentinck Island and the reserve in an update published June 10.

The waters around Bentinck Island are frequented by kayakers and paddle boarders, but public access to the island is strictly prohibited.