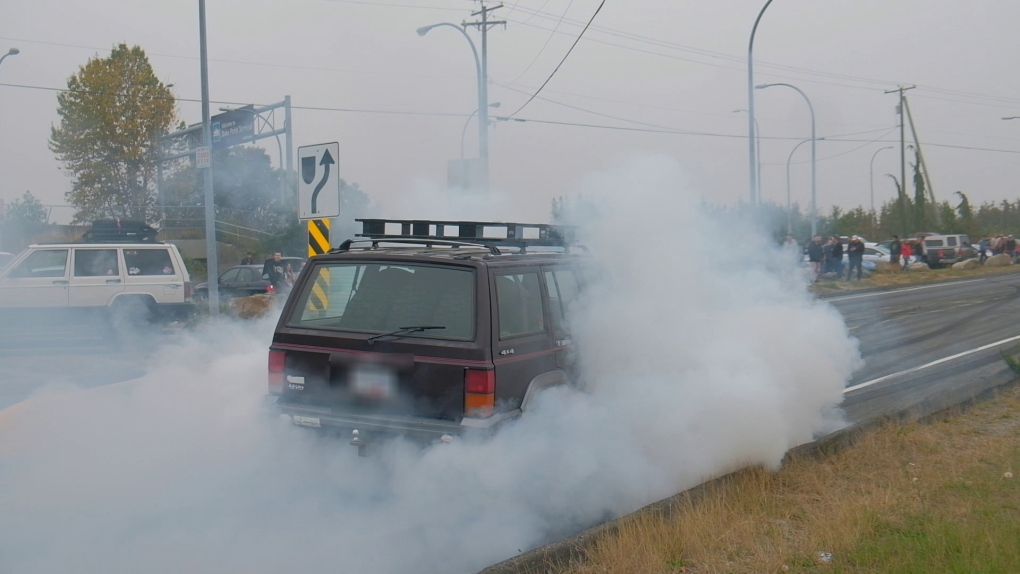 A vehicle "stunting" in Nanaimo is shown: (Nanaimo RCMP)

VICTORIA -- Police in Nanaimo say they have dealt a blow to a known drag-racing and stunting site near the south end of the city last week.

Mounties say that officers closed an area of Jack Point, near the Duke Point ferry terminal, for roughly four hours on Sept. 13 after approximately 100 people gathered to watch or participate in drag racing or stunting.

Stunting is commonly described as causing excessive smoke by spinning tires on a roadway, say Nanaimo RCMP, and is pictured in the photo provided by police.

“This activity destroys the roadway and poses a risk to not only the driver but the general public,” said Nanaimo RCMP Const. Gary O’Brien in a release Tuesday. O’Brien adds that stunting is prohibited under the Motor Vehicle Act (MVA).

According to RCMP, Mounties impounded 10 vehicles for seven days on Sunday, handed out 30 violation tickets under the MVA, issued 23 notice and orders for vehicle defects and ordered 11 vehicle inspections.

Police say the operation was conducted in response to years of reported drag racing and stunting on Nanaimo streets, especially in this area.

“City of Nanaimo officials have spent countless hours and dollars installing traffic calming measures with the purpose of dissuading these activities,” said O’Brien.

“Over the past five years, dozens of complaints have also been received concerning the noise levels, including complaints from workers in the industrial area and residents of nearby Gabriola Island,” he said.

O’Brien says that a number of enforcement actions have been taken over the years, however, none have stopped the racing and stunting from repeating.

Nanaimo RCMP say they “fully expect participants to set up an alternate location” now that this site has been shut down.

Police say that the investigation will remain ongoing and ask that anyone with information on where drag racing is taking place contact the Nanaimo RCMP non-emergency line at 250-754-2345.

“Stunting and drag racing on roadways is a dangerous practice and will not be allowed or tolerated by the Nanaimo RCMP,” said O'Brien.

Though tickets were issued and vehicles were impounded Sunday, no criminal charges were laid, say police.