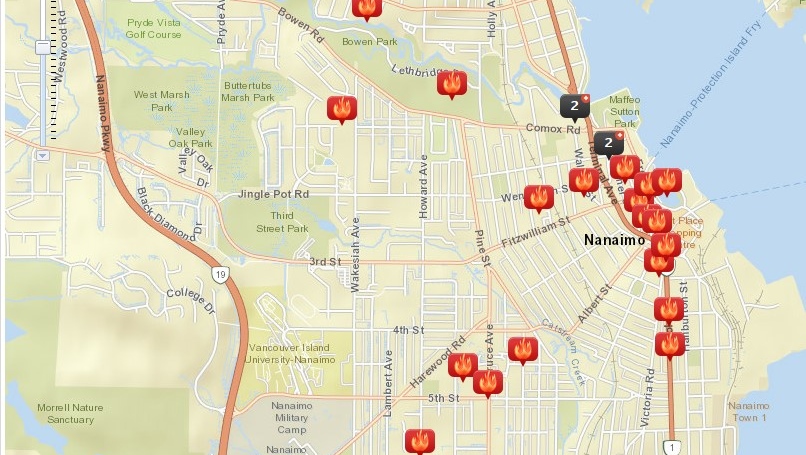 A map showing the locations of suspicious fires that were lit over the past three months is shown: (Nanaimo RCMP)

VICTORIA -- Police and firefighters in Nanaimo are encouraging residents to be on the lookout as RCMP investigate multiple suspicious fires that recently took place in the city's downtown.

According to Nanaimo RCMP, more than 20 suspicious fires have been set in the downtown area over the past three months.

Police say most of the incidents have been minor and generally involve cardboard or other combustible materials being lit inside dumpsters.

However, a fire that took place on June 4 was much more dangerous, according to police, and could have caused "significant damage" to a business if had been allowed to spread.

The fire occurred beside a business on Cliff Street and was doused by firefighters, say police.

"The biggest concern we have is combustible materials stored outside businesses overnight. Most are added to dumpsters that are not secured," said Nanaimo fire chief Tim Doyle in a release Tuesday.

"These need to be locked and the waste material disposed of or removed from the site daily," he said.

RCMP say police and fire investigators are coordinating their work, especially since fire crews are often the first on scene at a fire.

"As a result, they play an integral role in the preservation and collection of forensic evidence and in identifying possible suspects and witnesses to the incident," said Nanaimo RCMP on Tuesday.

Police are also asking for business owners and residents to keep an eye out for suspicious behaviour because some firebugs may examine potential fire sites before they act.

"To date, our officers have identified several persons of interest who may be responsible for some of these fires," said Const. Gary O’Brien of the Nanaimo RCMP. "There are still many fires that remain unsolved and this is troubling."

Anyone with information on any of the fires is asked to call the Nanaimo RCMP non-emergency line at 250-754-2345.

To protect your property from fires, fire chief Doyle has several tips: