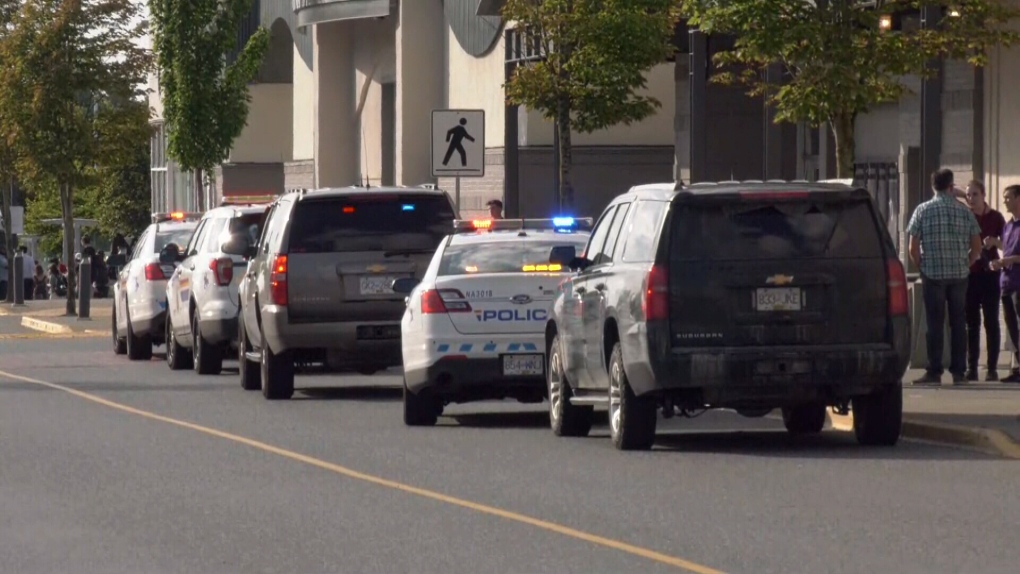 RCMP cars are pictured outside of Woodgrove Centre: (File Photo)

VICTORIA -- Nanaimo RCMP have arrested a man after he allegedly attempted to steal from several local businesses and an elderly man on Tuesday.

The incident began around 2:20 p.m. when Mounties were called to Woodgrove Centre for reports of a man attempting to shoplift from a Sport Chek in the mall.

Police say the man allegedly swiped some clothes from the Sport Chek and fled into the mall's parking lot. There, he was reportedly spotted trying to remove security tags from the clothes by beating them with a rock.

The man eventually gave up on the clothing when he failed to remove the tags and left the clothes in the parking lot, according to RCMP.

Police say the man then headed to a local Coast Capital Savings bank at 6581 Aulds Rd. and attempted to rob the bank. He allegedly demanded money from a bank employee, before backing out of the demand and leaving the store empty-handed.

Mounties say he then came across an elderly man who was withdrawing money from an ATM and attempted to rob the senior.

Police say the elderly man refused to hand over any cash and the suspect fled the area towards a nearby Staples store.

Once he entered the office supply store, police say that officer were able to catch up with the man and arrest him.

Mounties say no weapons were drawn in any of the robbery attempts, though the man reportedly made threats.

The 34-year-old man, William Joseph Lesieur, is now facing two counts of robbery and one charge of theft under $5,000. He is expected to appear in Nanaimo provincial court on Wednesday.