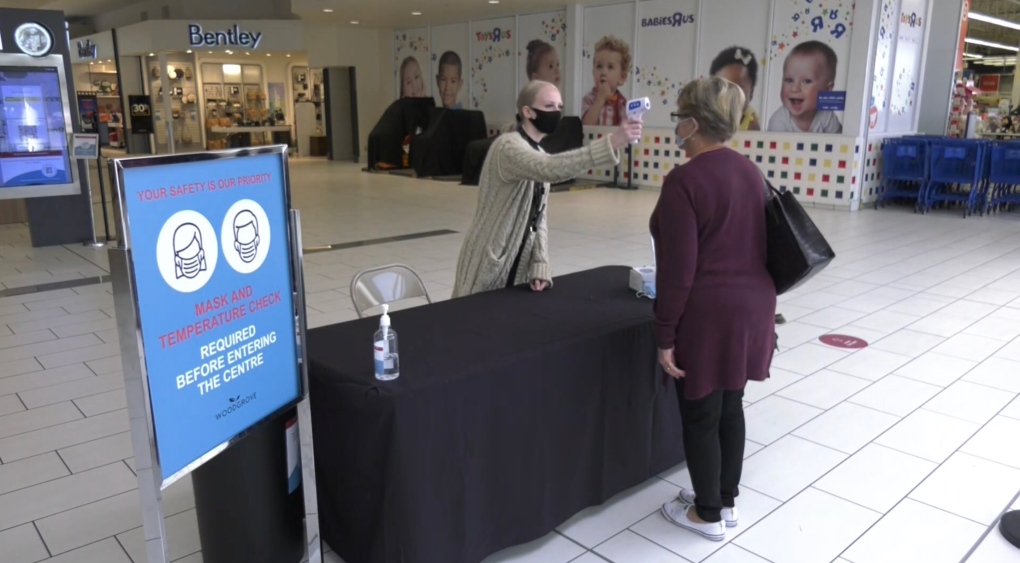 A Woodgrove Centre employee takes the temperature reading of a customer as she enters the mall. (CTV News)

“There have been other retail outlets but not actual shopping centres that have taken this stance as a centre," said Woodgrove Centre spokesperson Amber Cronk.

Some shoppers are keen on the idea but others think it’s a safety measure with a few holes.

“It’s interesting because they don’t enforce the masks once you’re inside,” said one shopper. “So you can take them off.”

Woodgrove Centre staff say they’re working with individuals on a case-by-case basis on enforcing the rules.

Many of mall's retailers have already implemented mandatory masks within individual stores.

Even though other shopping centres on the island have not implemented mandatory masks, most customers are donning them anyway.

“It’s a sort of symbol of doing something, a symbol of: you care about me,” said Dr. Bonnie Leadbeater with the department of psychology at the University of Victoria.

Leadbeater said there’s a reason why we see so many people wearing masks in stores, even though it hasn’t been mandated from the province or many other private operators.

“In situations where what you’re doing feels like it protects you and the people you care about, you’re even more likely to do it,” said Leadbeater.

For some, the thought of going to a shopping centre under the umbrella of COVID-19 can be pretty scary.

April Ponsford just finished a year-long battle with cancer and her immune system is still rebuilding itself.

“I have just been through, quite frankly, hell over the last year,” said Ponsford. “We need to protect one another, we need to be a community that cares for one another and there’s just no harm in it.”

Butchart Gardens will make masks mandatory as of Oct. 1, joining Vancouver Island retailers, including Mountain Equipment Co-op and Walmart, in implementing the practice.