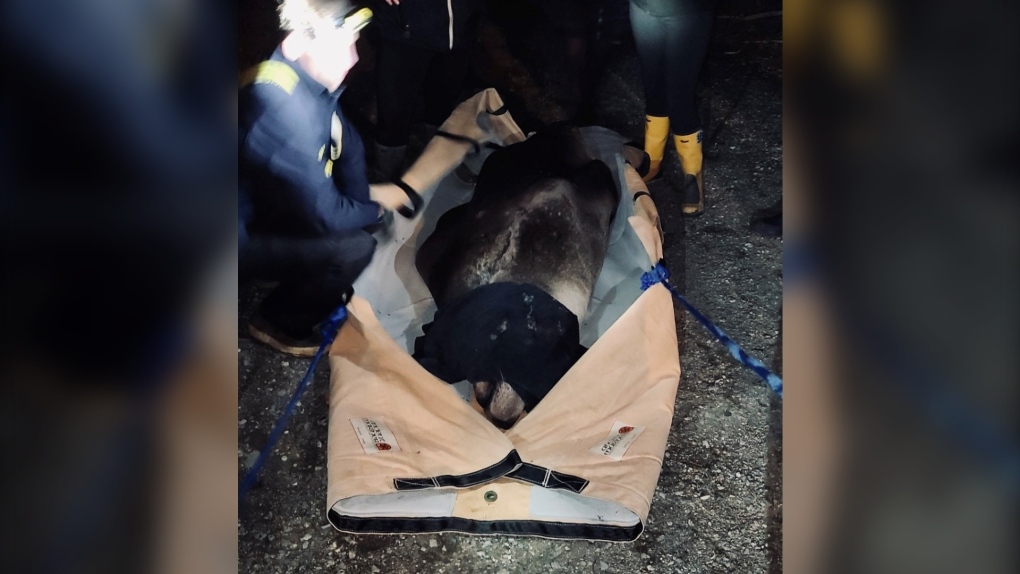 NANAIMO, B.C. -- In the past 20 years, Fire Chief Tim Doyle of Nanaimo Fire Rescue can’t recall ever being involved in a call to assist a stranded sea lion.

“I don't know if we have ever done a rescue like this,” Doyle told CTV News Vancouver Island. “We’ve responded to horses stuck in mud, cats and dog rescues, but nothing like this.”

Around 7:45 p.m. Thursday, crews responded to Invermere Beach and assisted a marine rescue group in lifting a 350-kilogram male sea lion into a carrier, then onto a van for transport.

The Vancouver-based Marine Mammal Rescue Centre got a call about the stranded animal late Thursday morning. When they arrived in the afternoon, they could tell the male sea lion was not in great condition.

After sedating the animal, crews from the Marine Mammal Rescue Centre hauled it up a steep path beside a staircase that leads down to the beach.

It took 12 people – six on each side of the sea lion – to carry it up the path. They were almost to the top when they decided to call firefighters for help.

“We started out with what we thought we would need and then we had to call in some reinforcements,” says Emily Johnson, assistant manager for Marine Mammal Rescue Centre.

“Their role was great because we were all pretty much exhausted by that point,” Johnson added.

Unfortunately, the sea lion died once it was place in the carrier for transport.

There were no visible injuries on the sea lion, which was transported to the Animal Health Centre in Abbotsford for a necropsy to determine its cause of death.

If you come across a marine mammal that looks to be in distress, the Marine Mammal Rescue Centre says the best thing to do is stay away and to not interfere or disturb the animal.