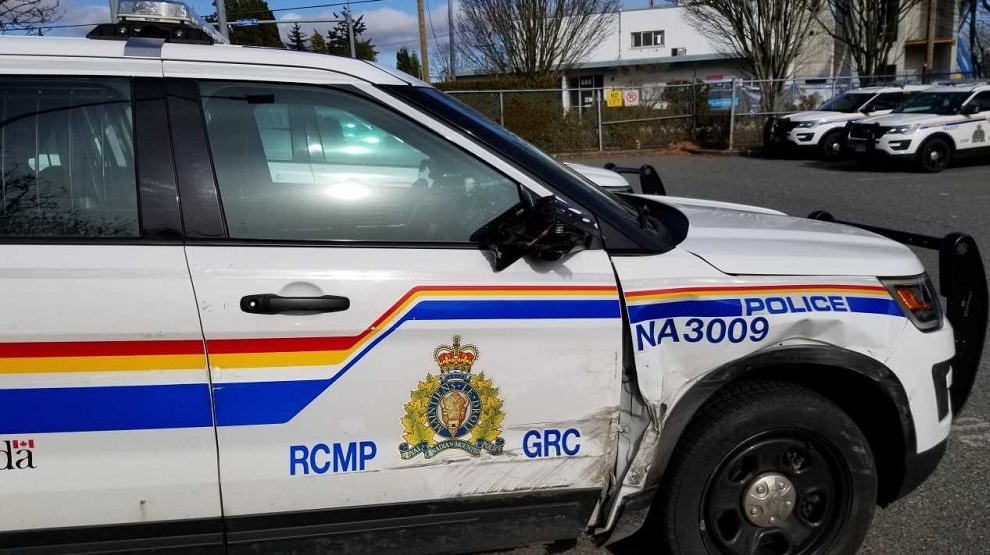 Nanaimo RCMP say two police vehicles incurred extensive damage and two others had superficial damage. All four vehicles have been taken out of service for repairs. (RCMP)

VICTORIA -- A Nanaimo man is in police custody after a vehicular rampage caused tens of thousands of dollars in damage to four RCMP vehicles in the city’s downtown core.

A police vehicle had its lights and sirens on when it was reportedly sideswiped by a speeding pickup truck that did not stop at the crash scene.

The officer was not injured in the crash and radioed a description of the truck to other officers in the area.

Another officer spotted the grey pickup moments later and followed it. The pickup truck then careened into two RCMP vehicles parked on the side of the street before striking a building.

As the driver attempted to back up and leave the scene, the pursuing officer pinned the truck with his police vehicle.

Police say the driver got out of the truck and charged at the officer, who used pepper spray and a stun gun on the man before arresting him.

Nanaimo RCMP say two police vehicles incurred extensive damage and two others had superficial damage. All four vehicles have been taken out of service for repairs.

“This incident highlights the dangers police officers may encounter on any given day, with individuals who, for unknown reasons, want to cause injury to the officers or to destroy police property,” said RCMP Const. Gary O’Brien in a statement Tuesday.

“Fortunately, no officers were injured in this rampage and all were able to continue on with their duties for the remainder of their shift,” he added.

A 57-year-old Nanaimo man is in police custody facing numerous charges. He was due to appear in Nanaimo provincial court on Tuesday.

“Our officers have had extensive interactions with this individual, with a number of the calls having a mental health component,” said O’Brien.