Two Saanich homeowners who found strangers living in their motorhomes in two separate break-ins are urging others to keep their RVs secured.

The break-ins were reported within 30 minutes of each other on Wednesday.

Carey Shelby called police after her son saw a naked man standing by the family's motorhome in the 3800-block of Douglas Street, trying to use a garden hose.

"My son told me to stay in the house, lock the door, we're calling the police," Shelby told CTV News.

When police arrived they found the still-naked 21-year-old Victoria man inside the RV and arrested him.

"Based on the condition of the inside of the RV, it is believed he had been living in it for at least a few days," police said in a news release.

Shelby said investigators on scene told her the man was likely detoxing and was very sick.

"Clearly an addict, a homeless man, and he was very, very ill," she said.

Her camper was left in such filthy condition that it had to be taken to an ICBC yard for biohazard teams to investigate.

UPDATE: one of the RV’s is being towed to ICBC, for an assessment and biohazard cleaning, after a naked man was found living in homeowner's RV in pair of Saanich break-ins https://t.co/fSB330tRxs @CTVNewsVI

"I asked them if I could go in and they said absolutely do not go inside there without gloves and a proper respirator mask," she said.

While the ordeal was "creepy," Shelby said she also felt bad for the man who made her trailer his home for several days.

"It was heartbreaking. I'm upset about the damage to my RV, but to see a young man like that who was clearly really sick, in a really bad place, thin, scared…I have sons really close to his age and I wonder what happened to get him there," she said.

Police say the man, who they've identified as Randy Cartwright, faces a charge of break and enter in the incident.

'He was holding it shut'

Only thirty minutes after the Douglas Street call, a homeowner in the 4400-block of Wilkinson Road called police to report a similar incident.

Krista Barnabe and her family had returned from a Canada Day camping trip when they walked by their old trailer and noticed the door was slightly open.

Her husband went inside and found another person's items, including dirty socks.

They turned on an alarm sensor and went inside to check surveillance footage of their driveway.

"It was Saturday morning, 1 a.m, that we could see him climbing up on the roof," she said. 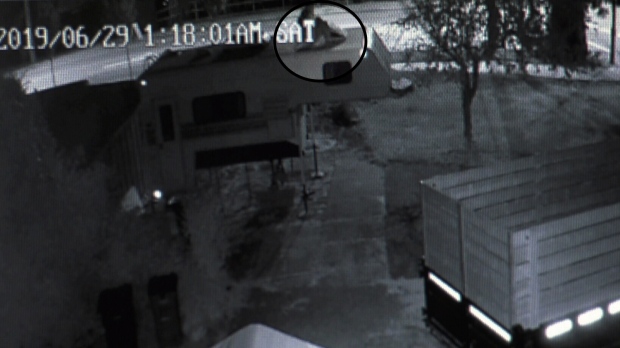 As they were watching the footage, the trailer alarm went off and Barnabe's husband called 911.

Officers showed up with a police dog and stood by as Barnabe's husband tried to unlock the trailer door.

"He was holding it shut on the other side so that [my husband] couldn't physically unlocked it," she said. " He didn't really want to come out of the camper. One of the officers said 'If you don't open the door, we're going to drop the dog in the roof vent.'"

That's when the suspect came out and surrendered.

Victoria-area man Jesse Juba, 20, was also arrested on a charge of break and enter and police said he was wanted on six outstanding warrants.

Barnabe said it was disturbing to know a man had been living in the trailer while her kids, 4 and 7, were just steps away.

"It's super unsettling, it's violating almost. Someone's been in your space and who knows what he's been doing, lurking around," she said.

Both homeowners and police said the two incidents are a reminder that idle RVs are appealing temporary homes for those seeking shelter.

"Be really aware. Check on it every day. I didn't look in it for three or four days, and I very easily could've stumbled into him," said Shelby.

The two suspects were held in custody and made court appearances on Thursday.