While Carmen Spagnola puts a lot of effort into making and tending to her flower garden, the same couldn’t be said for growing her first pumpkin.

"It felt like this random miracle that just happened," Carmen smiles.

So Carmen started searching for what she could do to help a gourd grow even larger next time, and found a picture of record-breaking pumpkin producer Dave Chan.

"It looked like he’d won the Super Bowl or something," Carmen smiles, pointing to the photo of Dave with his arms raised in triumph beside an almost 2,000-pound pumpkin.

After contacting him for advice, Carmen went to work on a pumpkin patch that quickly seemed to devour her driveway.

"It just became this relationship that I couldn’t stop tending," she says.

Carmen measured the pumpkin daily, while her husband Ruben calculated its estimated weight and captured her reaction on camera. 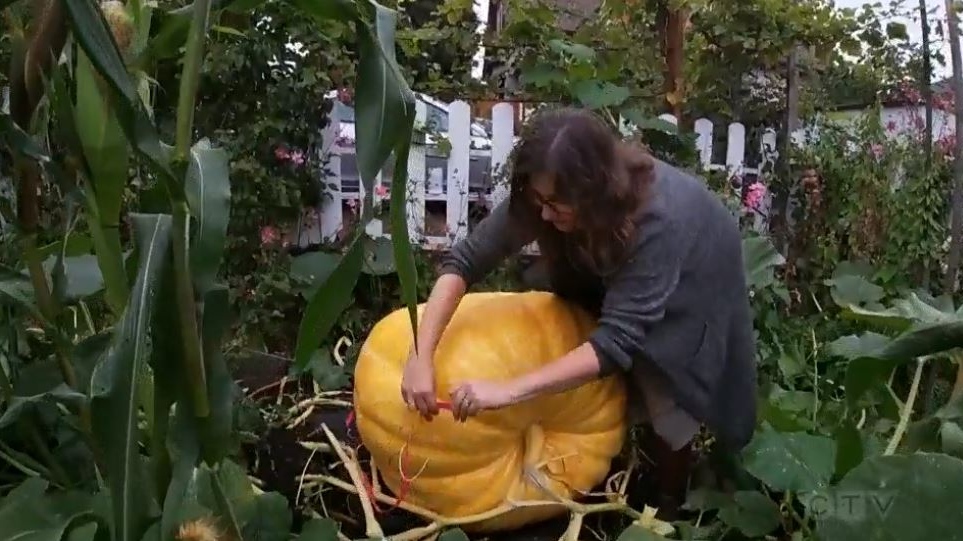 The roughly 323-pound pumpkin is shown.

While the pumpkin grew 10 to 20 pounds a day, Carmen’s exuberance also increased.

"All the love and attention and care I was pouring into it was immediately paying back in dividends," Carmen smiles.

So Carmen decided to pay the positivity forward by sharing her pumpkin’s progress (and joyful reactions) on social media.

Along with the exhilarating high of the pumpkin’s rapid growth, Carmen says she experienced the terrifying low of its potentially deadly split stem.

She found solace in a soundtrack of inspiring songs from the 1980s.

"Peter Gabriel’s 'Don’t Give Up' to 'Don’t Stop Believin' by Journey," Carmen laughs.

"And when I was hot pepper spraying it, to prevent a rat from eating it, I started inhaling it, and the song that came to me was 'Take My Breath Away' by Berlin!"

Whether she’s sharing her pumpkin playlist on Spotify or pumpkin pampering on TikTok, the feedback has been overwhelmingly positive.

"When I’m feeling joy, it’s triggering hope and possibility in other people," Carmen says. "And that’s not just a cliché, that’s neuroscience."

You see, Carmen works as a trauma therapist and calls joy "emotional nutrition."

"It’s really important that you don’t minimize or negate [joy]," Carmen says. "Whatever delights you, you should share it."

Which is why Carmen’s going to keep the gusto for gourds going and keep it growing past its current weight of 323 pounds. After harvesting this one for Halloween she’s striving to cultivate a record-breaker next year.

Russia on Monday unleashed what Ukraine called a 'massive missile attack' across the country, striking homes and buildings, killing civilians and disrupting electrical power that caused blackouts and cut water supplies for the Black Sea port of Odessa.