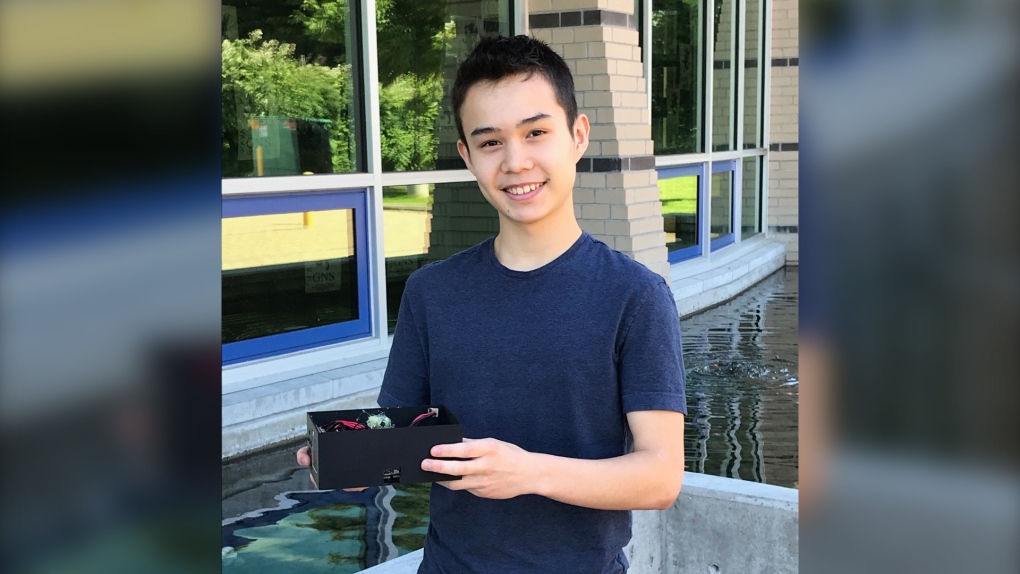 Ethan Chan, 15, attends Glenlyon Norfolk School in Victoria. He recently won the Weston Youth Innovation Award – and the $15,000 prize that comes with it – for creating a device that monitors and records kidney disease data. (CTV)

VICTORIA -- A Grade 10 student from Victoria has taken home a prestigious first-place prize from the Ontario Science Centre.

Ethan Chan, 15, attends Glenlyon Norfolk School in Victoria. He recently won the Weston Youth Innovation Award – and the $15,000 prize that comes with it – for creating a device that monitors and records kidney disease data.

“I was absolutely surprised, I couldn’t even imagine it,” says Chan about his success.

The device took a year and a half to develop. It uses photon-based colour measurement and machine-learning to provide accurate digital readings. It also improves on traditional urinalysis test strips.

The young scientist says his device has the potential to help researchers gather large sets of more-precise data in their battle against rare kidney diseases, something he himself knows all about.

“I did this for kidney patients because I, myself, am a kidney patient,” he said. “Every day when I get up in the morning I have to test my urine for various proteins and depending on that protein, different medical results take place. So I knew it was important to make a device that standardizes this process to make it more accurate.”

Chan is ecstatic about how his work has been received.

“A lot of doctors have looked at my device and were like, ‘Oh wow, this is actually something that could be useful,’” he said. “So I’ve been really lucky to have had a response that has been positive towards my device.”

The process to build the medical device was challenging, according to Chan. He credits, and thanks, his science teachers at Glenlyon Norfolk and his work groups at the University of Victoria for their help and support in guiding him through the project.

“The experience of developing a project and going through it is definitely something which I will never forget, because it’s such an amazing experience with lots of really supportive people along the way,” Chan said.

The young inventor has high hopes of making a difference for people suffering from kidney disease and hopes his invention will help.

“I think the next step for my device is to make it open-source and also see if there are possible manufacturing possibilities so that it can get into the hands of people who can actually use and need it,” he said.

The Weston Youth Innovation Award celebrates teens aged 14 to 18 that are using science, technology and innovation to make a positive impact in the world.

Second-place went to 14-year-old Nora Keegan, from Calgary, who, at age 9, set out to discover why her ears hurt when she used the hand dryers in public washrooms. She spent years analyzing and collecting data. Her results have been published in Paediatrics & Child Health, and she has met with manufacturers to raise awareness about the problem.

Other inventions – like a two-kilogram backpack that expands into a two-metre, thermal-lined shelter for the homeless and a wearable device that alerts its user to physiological changes associated with depressive and anxiety disorders - received national finalist awards.

Chan plans to use his winnings for university and to fund his next project, which he is currently working on: a device that measures cerebral spinal fluids for use in trauma wards.

To find out more about the awards and the young inventors, visit the Ontario Science Centre website.