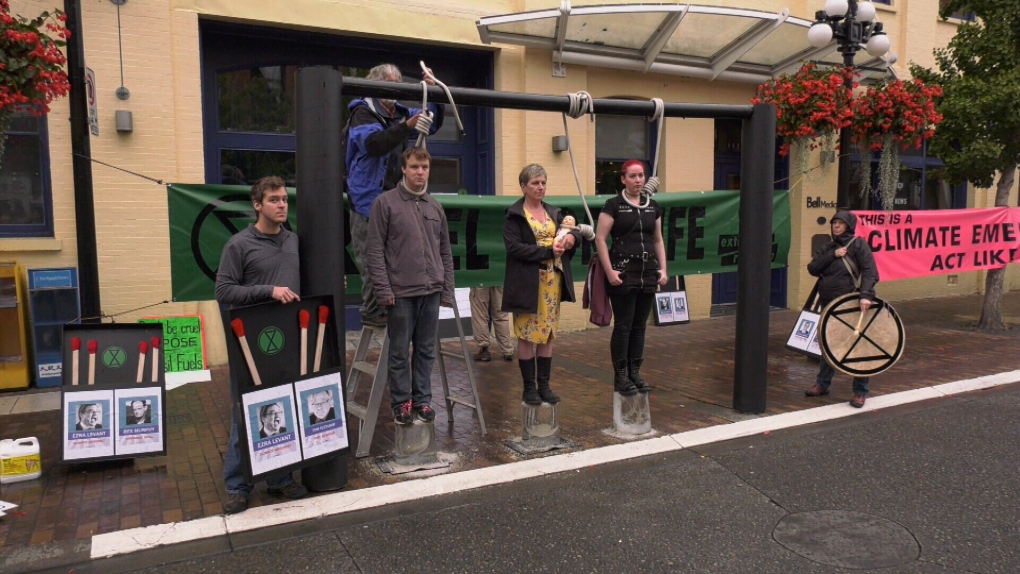 The group Extinction Rebellion Vancouver Island held the protest to draw attention to what they say is a lack of awareness in the media about the climate emergency. (CTV Vancouver Island)

Protesters stood on blocks of ice with nooses around their necks on Victoria's Broad Street on Tuesday to symbolize that time is running out to deal with the climate crisis.

The group Extinction Rebellion Vancouver Island held the protest to draw attention to what they say is a lack of awareness in the media about the climate emergency.

The protesters say this is the single biggest issue facing the world and should be covered daily in the news.

“What the news media needs to be doing for them every single day is reporting with seriousness about the reports that are coming out from the Intergovernmental Panel on Climate Change,” said Mark Nykanen, a protester and former journalist.

“We’re in a serious situation. There’s a countdown going on right now. We are looking to have to make huge cuts in carbon emissions in the next 11 years."

One of the protesters on the makeshift gallows called the climate crisis "the greatest catastrophe humanity has ever faced."

The group plans to shut down the intersection of Government Street and Belleville Street for 11 hours on Friday, signifying the 11 years the UN climate change panel has said are remaining to stop a global temperature rise above 1.5C.

The protesters will also be promoting a week of action including a general strike on Friday, Sept. 27.