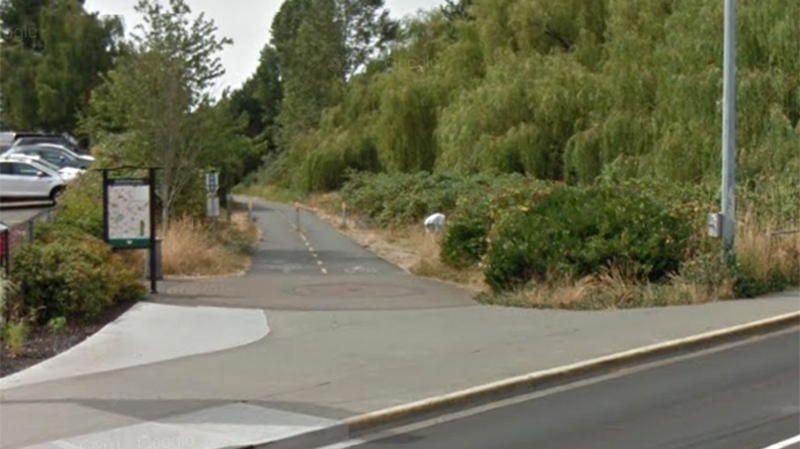 The entrance to the Lochside Regional Trail on McKenzie Avenue in Saanich is shown. (Google Maps)

Police are investigating after a 21-year-old woman was sexually assaulted while walking in Saanich on the weekend.

The woman was walking east on McKenzie Avenue toward Borden Street at 2:30 a.m. when she was tackled to the ground at the Lochside Regional Trail, according to police.

The man then grabbed the victim by her waist and tried to pull her toward him, investigators say.

As he tried to remove her shorts, she fought back and was able to escape.

The man is described as being between 25 and 35 years old, white with dark, tanned skin, around 5'10" tall with a heavy build and light stubble on his face.

He was wearing a dark long-sleeve shirt with a chest-length zipper and a black baseball hat with an unknown white insignia.

"The survivor of the attack is an incredibly brave woman and she even managed to fight off the assailant," Saanich police spokesman Sgt. Jereme Leslie said in a statement. “Officers are currently investigating the sexual assault and we’re asking for anyone who may have seen the assault, or knows who the suspect is, to come forward and talk with police."

Police say the victim contacted them to report the attack Tuesday night.