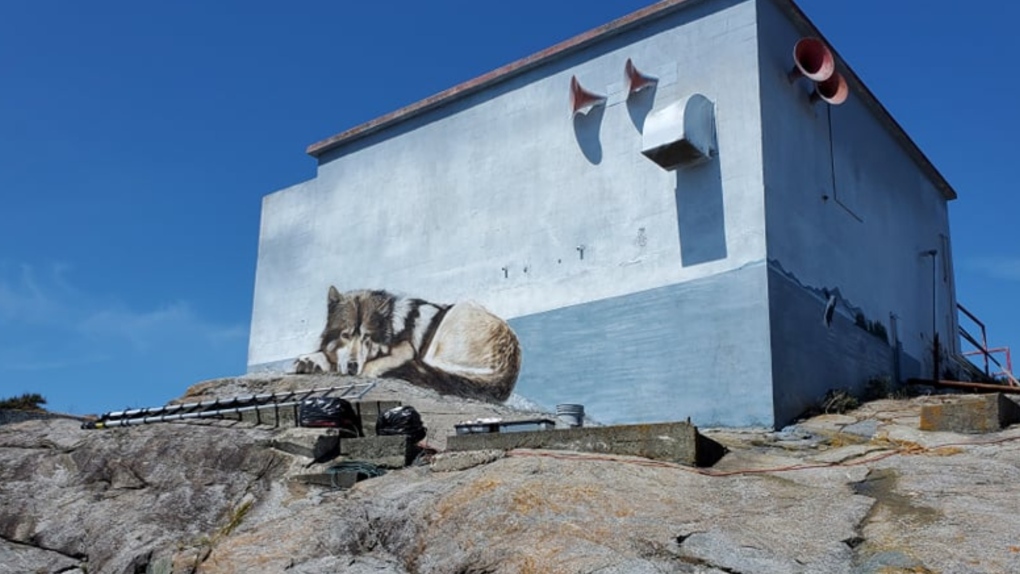 VICTORIA -- Local artist Paul Archer has painted a striking portrait of the lone wolf of Discovery Island, Staqeya, as a memorial for the wolf who was shot and killed by hunters earlier this year.

Staqeya, also known as Takaya, captured national attention after it spent years living alone on the small island off of Victoria’s coast.

After years of living in solitude, however, the lone wolf began venturing onto Vancouver Island in March.

After the wolf made its way into James Bay, the BC Conservation Officer Service decided to sedate and relocate the animal.

The wolf was relocated to an “undisclosed wilderness location” on the west coast of Vancouver Island. Shortly after, the wolf was legally shot and killed by hunters.

After hearing Staqeya’s story and watching a documentary on the lone wolf, local artist Paul Archer and a group of friends travelled to Discovery Island with plans to create a memorial.

“So, we more or less canoed out there and we looked around for a place to set up a memorial,” Archer told CTV News.

“We noticed the perfect spot, which was this place where he used to sit anyway, which is this old abandoned foghorn building.”

Archer says the building’s paint had long since deteriorated due to the weather, so he and his crew created the large mural there in the late hours of Thursday evening.

“As soon as you see or hear about Discovery Island it should really almost be, ‘Takaya island,’” said Archer.

“It was such a rare, rare wolf, so we just wanted to make a big statement as soon as you came up to the island.”

While the local artist did not seek permission from the Songhees First Nation – whose territory includes Discovery Island – to create the memorial, members of the First Nation say they approve of the mural.

“I thank him for preserving the memory of Steqeya in this way. He is truly a gifted artist and I thank him for doing this,” said Rob Sam, Chief of the Songhees Nation.