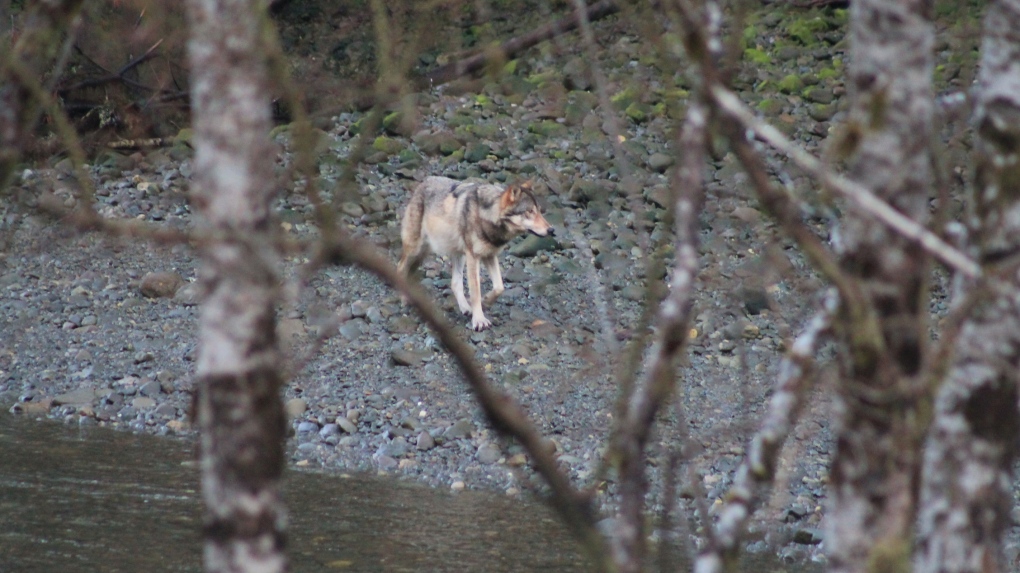 A wolf in Tahsis, B.C., where at least two pet dogs were hunted and killed by wolves in recent weeks. (End of the Road Adventures)

VICTORIA -- Wolves in a remote coastal community on Vancouver Island have killed at least two pet dogs in recent weeks, prompting conservation officers to warn residents about the danger.

The first reported attack in Tahsis, B.C., happened about three weeks ago when a man saw two wolves pounce on his dog.

“The dog’s owner actually elected to physically engage the one wolf and, as I understand, he kicked it to get it to let go of his dog,” conservation officer Steve Petrovcic told CTV News on Tuesday.

“Those two wolves let go of the dog and backed off but unfortunately that dog succumbed to its injuries," he added.

“Unfortunately we still have at least two wolves showing interest in people’s pets and appear to be hunting pets in people’s yards,” Petrovcic said. “Over the last month and a half we’ve had increased wolf activity right in the community.”

The wolves are exhibiting troubling behaviour, according to the officer, including hunting on village streets in broad daylight.

“Daytime sightings, desensitized behaviour, habituated to pets – that’s obviously undesirable behaviour,” Petrovcic said. “The behaviour unfortunately sounds like it’s escalated to the point where these wolves are walking the paved roads; they’re not exhibiting any fear.”

Not all of the recent sightings have been fatal attacks. The officer says residents have also reported wolves chasing or lunging at their pets.

One Tahsis resident told CTV News that several destroyed goose carcasses were recently found in a schoolyard and residents are blaming the wolves for killing cats that have gone missing.

The B.C. Conservation Officer Service has informed the mayor and council of Tahsis about the problem animals. Officers hope residents will report any new sightings as quickly as possible so officers can respond in time to find the wolves.

“We want the public to be extra vigilant in doing what they can to stay safe, keep their pets safe, and promptly report any sightings to the conservation officers,” Petrovcic said.

Sightings of problem animals can be reported to the conservation service tip line at 1-877-952-7277.