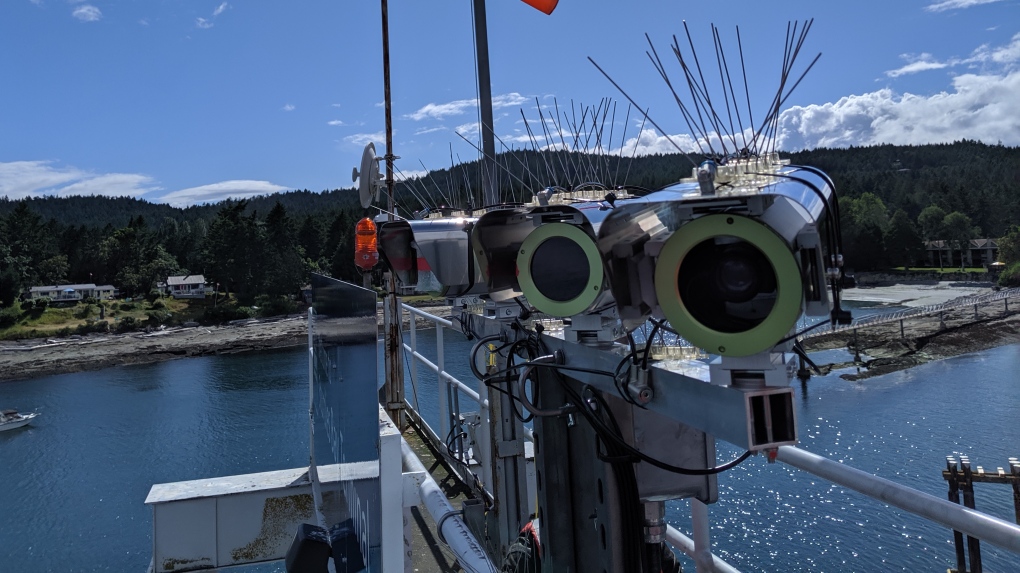 Fisheries and Oceans Canada is the primary funder of the project and the one-year pilot program is being done in collaboration with the University of Erlangen in Germany and Woods Hole Oceanographic Institution. (BC Ferries)

For the remaining 80 southern resident killer whales (SRKWs), the area has become increasingly dangerous. To assist researchers in learning more about the SRKWs, thermal-imaging cameras were installed at the BC Ferries terminal in June.

"Some of the passages are very narrow, which increases the chance of vessel strikes since whales and boats share the same waterways for travel,” said Dan Zitterbart, an assistant scientist at Woods Hole Oceanographic Institution in Massachusetts. “This not only applies to killer whales, but to humpback whales as well, which are growing in population in this area.”

Whales in the Salish Sea face a range of threats, including potential contamination from oil spills from commercial shipping, and persistent organic pollutants (POPs) which infiltrate ocean sediments and accumulate in Chinook and chum salmon, important food sources for resident killer whales.

For the next year, cameras will use temperature data to differentiate between marine mammals, ships and the surrounding water. The goal of the project is to determine if automated thermal-imaging technology, when used in combination with visual and acoustic detection, can be a reliable and effective way to detect whales.

BC Ferries is involved in a variety of initiatives that support whale research.

"We believe it is important to support research projects such as this one as the marine community in general will benefit from these findings, ” said BC Ferries president and CEO Mark Collins.

"We are committed to working with scientists and whale researchers to identify new ways we can operate our ships to protect whales, while still meeting our obligations to the communities we serve.”

The thermal cameras are linked to a computer that runs robust detection algorithms. The algorithms run in the background so the cameras can be "trained" on model images of vessels and whales. This helps minimize the number of falsely identified "whales" that are reported by the cameras.

Fisheries and Oceans Canada is the primary funder of the project and the one-year pilot program is being done in collaboration with the University of Erlangen in Germany and Woods Hole Oceanographic Institution.

If the program is successful, the system could be used to alert ships to the presence of marine mammals, such as endangered killer whales and humpbacks. It may also assist in identifying high-risk areas so mariners can make real-time decisions to slow down or use avoidance tactics when whales are present.