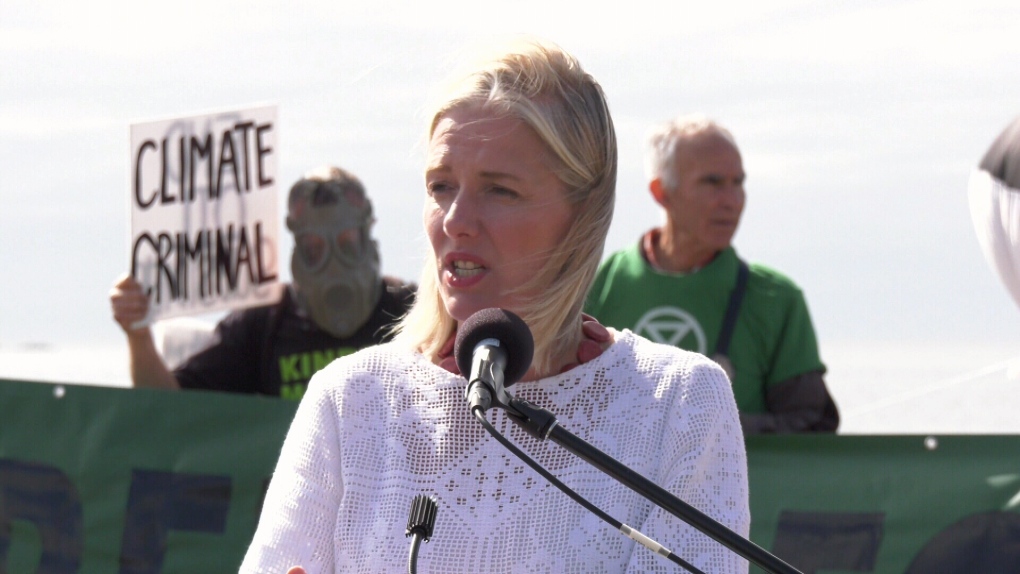 Minister Catherine McKenna was in the Victoria area to announce more than $4.3 million to fund 49 conservation projects across the country. (CTV Vancouver Island)

One man was arrested while protesting an appearance by Canada's Minister for Environment and Climate Change in Oak Bay on Monday.

Minister Catherine McKenna was in the Victoria area to announce more than $4.3 million to fund 49 conservation projects across the country over the next three years.

Activist Howard Breen with the group Extinction Rebellion Vancouver Island was seen carrying a sign calling McKenna a "climate criminal" and calling for her arrest before he was himself arrested by Oak Bay police.

"We are here to put her in protective custody because we feel she could be in imminent harm by some individuals who may want to act out on their anger," Breen told media.

"She is grossly negligent in her conduct which his unbecoming of a federal environment minister."

McKenna was joined by Victoria Mayor Lisa Helps at Cattle Point to highlight three local conservation projects, including over $108,000 for the District of Oak Bay to support the conservation and recovery of 14 at-risk plant species found in Victoria's Uplands Park.

“Our nature is in crisis," McKenna said.

"The abundance of insects, plants, and animals around the world is declining at an alarming rate, and Canada has a unique responsibility to the world to protect the species at risk within our borders. By investing in local conservation projects, and supporting the leadership of Indigenous communities working to protect nature, together we are making important progress toward protecting species at risk and the places they depend on.”