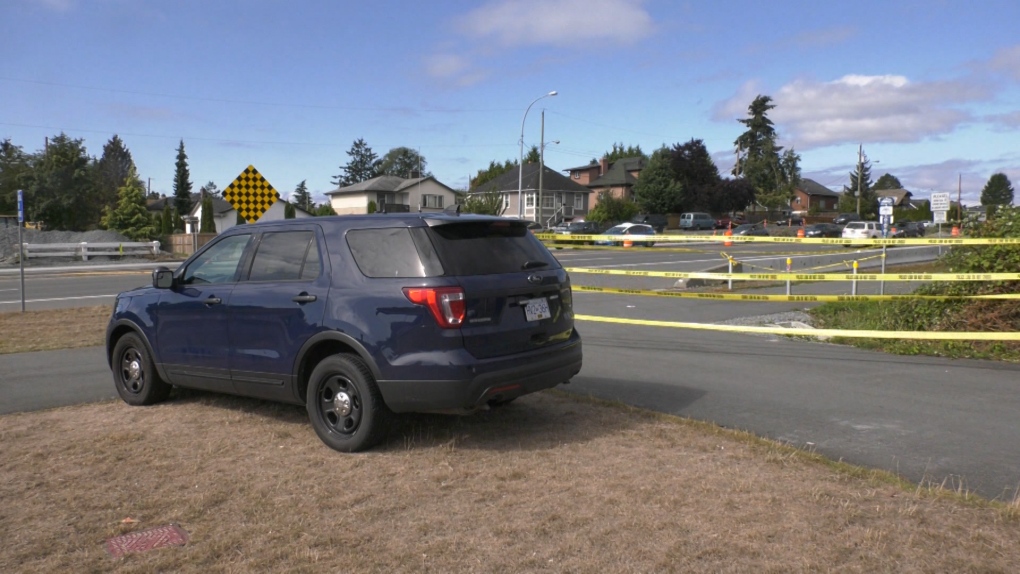 Police said they expected the area would be cordoned off until sometime on Monday. (CTV Vancouver Island)

The Vancouver Island Integrated Major Crime Unit has taken over the investigation of a man found dead in Saanich Saturday morning.

Saanich police said Sunday that they were called to the intersection of Crease Avenue and Wascana Street just before 9 a.m. Saturday, where a man was found lying unresponsive outside a home.

Emergency personnel confirmed that the man was dead. Because of the nature of his injuries, police say his death is suspicious.

The VIIMCU will be working closely with detectives from the Saanich Police Department, as well as other specialized units from across the region and the BC Coroners Service, police said.

On Sunday, investigators were still working to confirm the man's identity and his cause of death. Police said they expected the area would be cordoned off until sometime on Monday.

Because of the location of the death, near both the Galloping Goose Trail and the Trans Canada Highway, Saanich police Sgt. Julie Fast said investigators believe there are more witnesses for officers to talk to.

"It is very likely that someone from the area or passing through, saw something of value to this investigation," Fast said. "If you were in the area between 6 a.m. and 9 a.m. yesterday morning, we want to hear from you. Additionally if you were driving through at that time and have dash cam video, we would like to view it."

Anyone who has information that could help the investigation is asked to call the VIIMCU information line at 250-380-6211. Those wishing to remain anonymous can call Crime Stoppers at 800-222-8477.