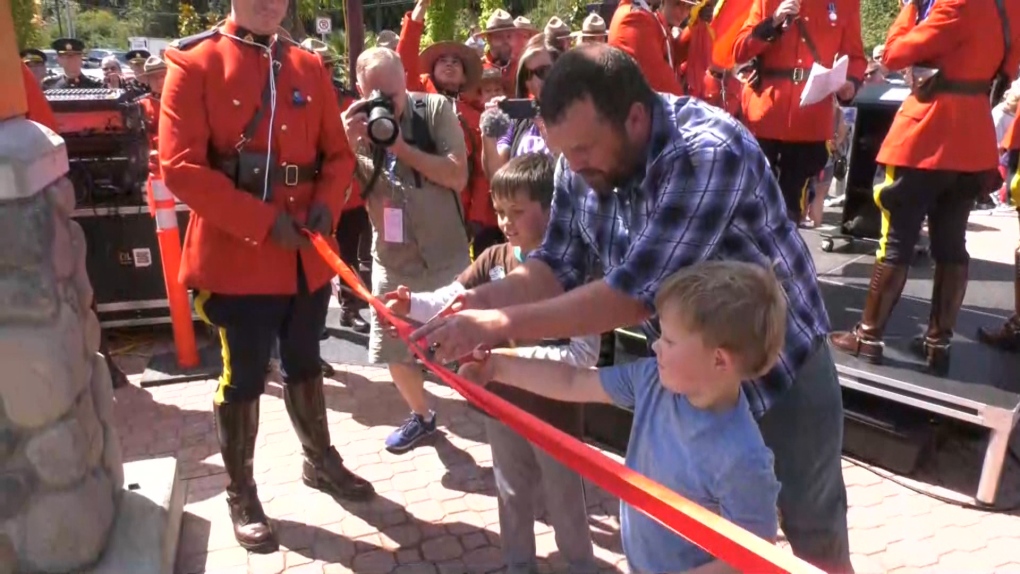 Bradley Aschenbrenner and his two sons cut the ribbon to officially open the Sarah Beckett Memorial Playground in Langford. Beckett, Aschenbrenner's wife and the boys' mother, was killed by a drunk driver in 2016. (CTV Vancouver Island)

The Pacific FC match at Westhills Stadium was ostensibly the main draw bringing people to Langford on Saturday, but for a huge number of people in attendance, what was going on outside the stadium overshadowed the action on the field.

B.C. Premier John Horgan and Langford mayor Stewart Young were among the dignitaries on hand for the opening of the Sarah Beckett Memorial Playground, named for the West Shore RCMP constable who was killed when a drunk driver slammed into her cruiser in April 2016.

The couple's two sons left handprints in the sidewalk outside the playground at the event.

"I mean, we shouldn't be here celebrating this park, but we are, and it's such a fitting tribute to have those boys' hands in that concrete that will be here forever," Aschenbrenner said.

Dozens of children took to the playground after the ceremony, something Aschenbrenner said Beckett would have loved to see.

"She was such a great mother," he said. "She loved kids so much. To see this come together to fruition and to see all these kids out here is just amazing."

Horgan and Young also commented on the turnout for the event.

"The horror and shock that we all felt, of course, is felt every day by Sarah's family," the premier said, adding that he was glad "to see so many people here to offer their support and kindness and to let Brad and the family know that we will always be here."

"When tragedy strikes, we have to get behind (the victims) as a community," said the mayor. "I'm very proud of my community."

Driver Kenneth Jacob Fenton was sentenced to four years in prison for killing Beckett in the 2016 crash. His blood-alcohol content was three times the legal limit when he hit her vehicle, the court heard at his sentencing hearing. He was also estimated to be travelling at nearly 90 km/h in a 50 km/h zone.

Earlier this month, Fenton was granted day parole for a period of six months.