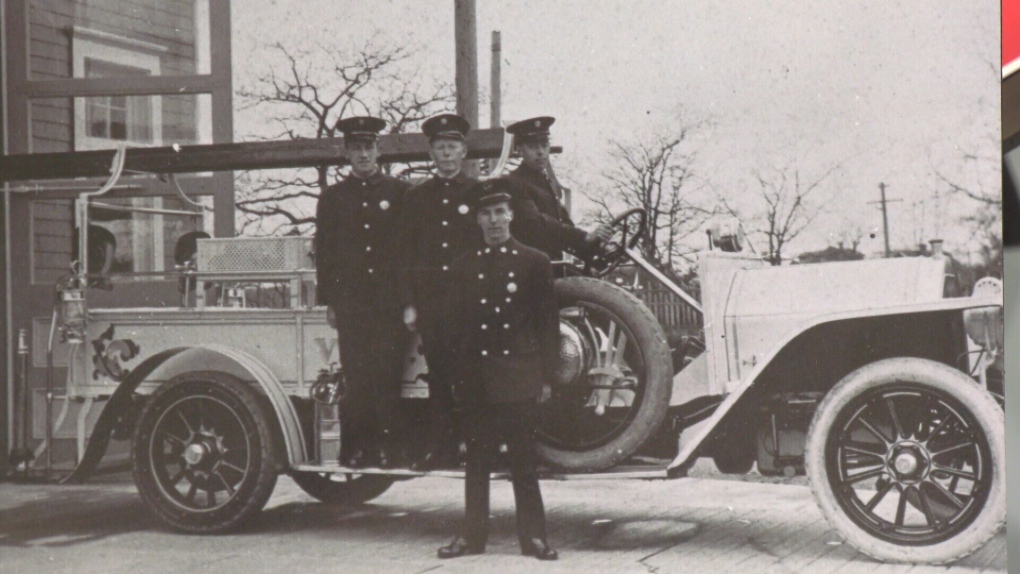 Saanich firefighters pose by the first fire truck purchased by the District in 1919. (Saanich Archives)

In the early 1900s, Saanich was growing. People were beginning to leave the hustle and bustle of Victoria's downtown core for a quieter community.

By 1918, the population of Saanich had reached just over 10,000 people and the municipality decided it was time to start their own fire department.

The following year, a fire department was born, albeit, a very small one.

One fire truck with a single 1,000-feet hose was acquired in1919 and Jack Little was hired as Saanich’s one and only firefighter.

“That would have been a big job for one man to take on,” said Sean Lillis, Lieutenant Inspector with the Saanich Fire Department. “It’s impressive.”

Fast-forward 100 years, the Saanich Fire Department is now made-up of 127 male and female firefighters, with around 20 vehicles stationed throughout its 3 halls. It’s anyone's guess how many feet of hose it has.

Last year, Saanich Fire responded to nearly 4,600 calls. However, it must be pointed out that when Little was the lone man in the department, firefighting was a lot different.

Most calls to the department were fire related. Now, firefighters respond to all sorts of things, from car accidents to medical-aids and beyond. Not to mention, the population of Saanich is now made up of more than 120,000 people.

In 1960, Saanich acquired its first ambulance which was stationed at the Saanich Fire Hall. This ambulance allowed firefighters to start to take on medical calls.

The ambulance responsibilities continued for 14 years until the BC Ambulance Service was created in 1974.

“We were one of the first stations in the province to have an ambulance station in the department,” said Lillis. “So now, with the BC Ambulance Service in existence, we assist them.”

Over the last 100 years, firefighting has changed alongside advancements in technology. An axe, for instance, used to be one of the handiest tools in a firefighter's arsenal.

“Back in the day, when dealing with an extraction we would have had just an axe and a pry bar,” said Lillis. “It would have taken ages to get a person out.”

Now, first responders have access to the ‘Jaws of Life,’ low-pressure airbags to lift cars and thermal imaging cameras to look for hot spots after a fire has been extinguished.

“We just hit those spots without causing a ton of damage to the house.”

In the future, Lillis says he could see that technology integrated into firefighters' masks. While that technology isn’t available yet for Saanich, he has seen many departments use other modern equipment, like drone technology, to help in firefighting. Drones, however, aren't quite on the department's radar just yet.

Saturday, Sept. 21 marks the official 100th birthday of the department and they’re throwing a party.

The festivities will be at Fire Station No. 1 at 760 Vernon Ave in Saanich. It’s a family affair where kids can get a tour of the station, learn to use a fire hose and enjoy a few slices of pizza and cake.