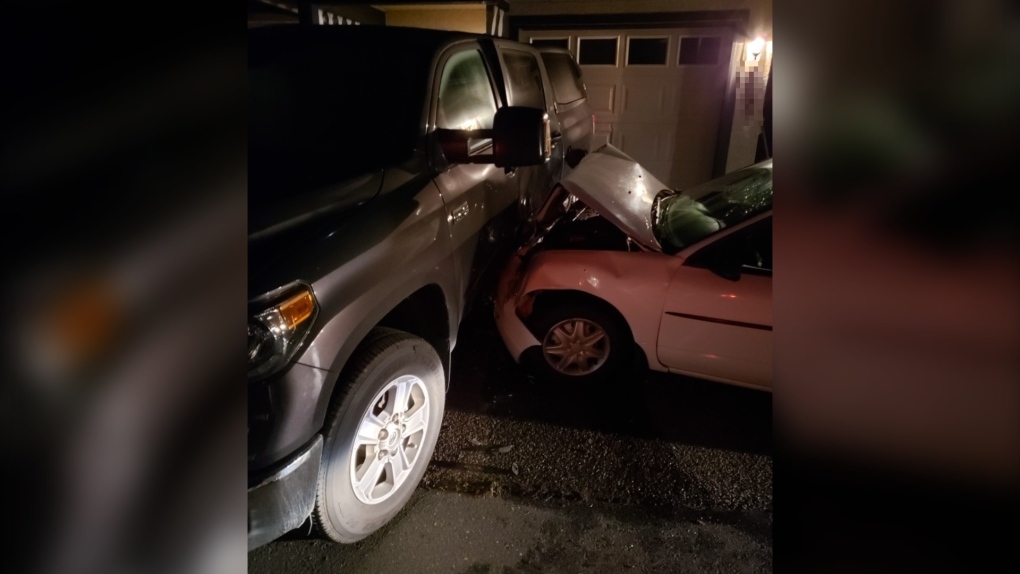 An image of where the stolen vehicle came to rest after crashing into a parked car. (Roger Harper)

LANGFORD -- Mounties are offering a sincere thank-you to a West Shore homeowner after a brave act Tuesday.

Police attempted to pull the vehicle over as it was driving erratically and without headlights but were unsuccessful. Speeding ahead onto McCallum Road the vehicle slammed into two parked cars and came to rest in a driveway.

"They hit it so hard my truck moved six feet," said the homeowner, Roger Harper. "We are thankful it didn't go into the house."

Once Harper was awoken by the racket, he rushed to the scene to offer help but only found a man allegedly trying to flee the crash site.

The Langford homeowner then decied to jump into action and held the suspected thief down until police arrived.

"He needed to stick around," said Harper. "I just held him."

Police say that they are grateful for Harper's assistance but still recommend that people avoid approaching suspects as it can be dangerous.

“We are thankful of the homeowner’s assistance in this case,” said West Shore RCMP Const. Nancy Saggar. “However we do not recommend approaching or holding down a suspect as this can be dangerous and unpredictable.”

The 24-year-old driver has been arrested and is expected to be charged with possession of stolen property and flight from police.