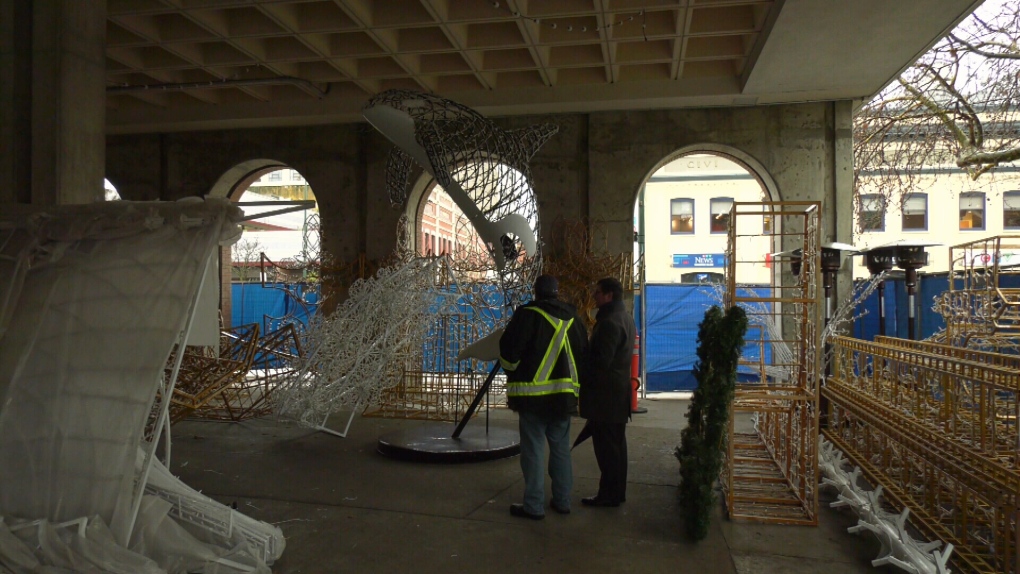 The Lights of Wonder display was originally scheduled to open in Centennial Square on Friday, Dec. 13. (CTV News)

VICTORIA -- A highly anticipated light display in Centennial Square is set to open following a weeklong delay, according to the Downtown Victoria Business Association (DVBA).

While the DVBA's Lights of Wonder display was originally scheduled to open on Friday, Dec. 13, the opening date was pushed back to Friday, Dec. 20.

According to the DVBA executive director Jeff Bray, the delay is largely due to a new piece of heavy equipment that required installation plans to change significantly.

"So essentially we have assembled an expert group of people, who are structural engineers, electrical engineers, who just felt like they wanted to take some more time to make sure all the logistics were in place, because once you start, you have to keep going," said Bray.

"The team actually needed a different piece of heavy equipment for one of the main elements, so you have to secure that and then that changes all the logistics for everything else," said Bray. "So they just felt rather than trying to do it piecemeal, let’s actually redevelop the installation plan with this new piece of equipment and start all at once and make sure it's done right."

The massive light display is the largest installation to ever be erected in Centennial Square, and is completely free to the public.

In total, the display will feature 37 different light structures, including a 12-metre tree, a six-metre orca, 18 smaller trees, a Chinatown archway, a parliament archway, a dogwood archway and koi fish lights.

Throughout the installation's two-week run, live music and performances will also take place.

"It's going to be a great space," said Bray. "There's no fences, there's no tickets, people are welcome to come as many times as they'd like and it's just a great place to be downtown and then carry on with your day and evening with shopping and dining."

The Lights of Wonder display in Centennial Square will open on Friday, Dec. 20 at 4 p.m. and remain open until Saturday, Jan. 4 at 10 p.m. The display will be closed on Christmas Day and New Year's Eve.