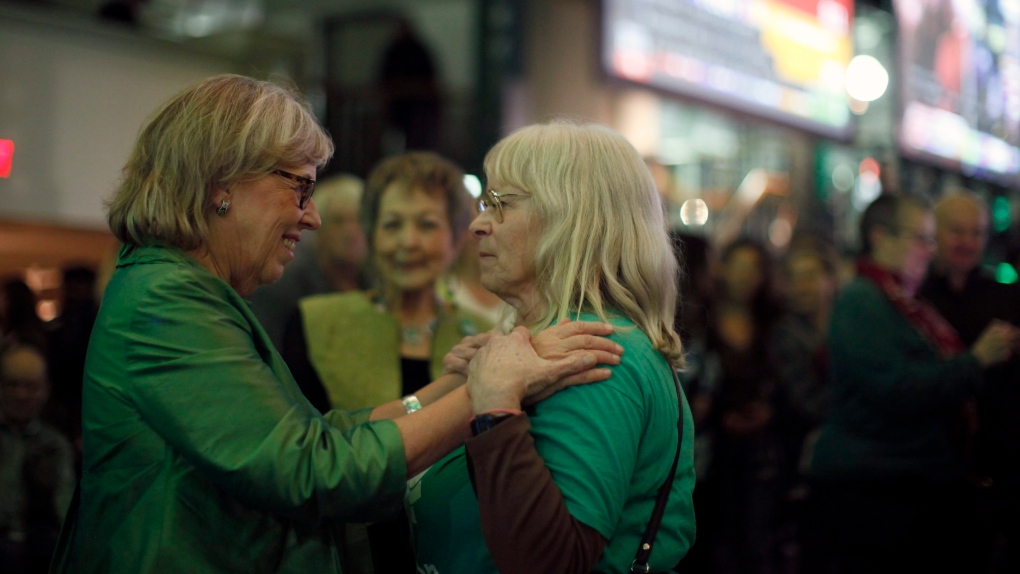 Green Party leader Elizabeth May shares a moment with Diane Bell, a friend from her parish church, as results come in during election night at Crystal Gardens in Victoria, B.C., on Monday, October 21, 2019. (THE CANADIAN PRESS / Chad Hipolito)

VICTORIA -- High voter turnout and low MP turnover are the dominant themes in the wake of the 2019 federal election on Vancouver Island.

Island voters turned out in numbers higher than the national average, but the higher turnout doesn't appear to have been motivated by any desire for change.

All six incumbent candidates on the island were reaffirmed in Monday's vote, and the only new face to join the crowd will take over a seat already held by her party.

Voter turnout on the island averaged 70.25 per cent of the eligible electorate, according to the preliminary numbers. That's nearly five percentage points higher than the national turnout of 65.95 per cent.

Saanich-Gulf Islands had highest turnout of the seven island ridings with 73.12 per cent of voters casting ballots, followed by Victoria with 71.51 per cent.

The island's largest riding of Nanaimo-Ladysmith saw 68.55 per cent of electors cast ballots, the lowest turnout of the island ridings.

While the preliminary turnout numbers from Elections Canada show high engagement among voters on Vancouver Island and the Gulf Islands, turnout in 2019 was lower than the previous federal election – both locally and across the country.

In the 2015 election, approximately 76 per cent of island voters cast their ballots, while nationally turnout was about 68 per cent.