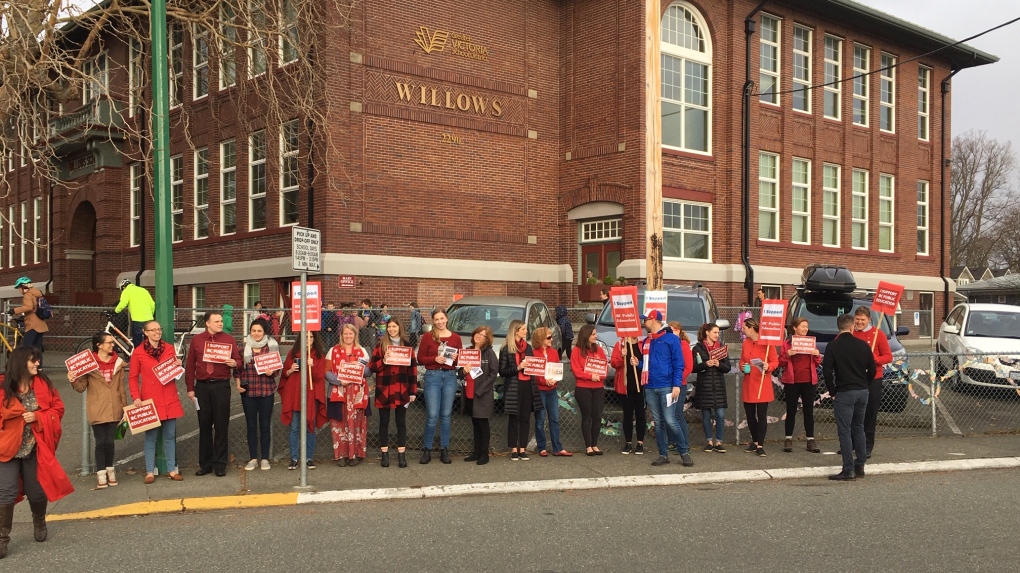 Teachers in the Greater Victoria School District gathered outside of a number of schools Friday morning to protest a possible rise in classroom sizes, and reductions in educational assistants: Feb. 28, 2020 (CTV News)

VICTORIA -- School teachers in Greater Victoria took to the sidewalks Friday to protest class-size increases, cuts to teacher supports and to draw awareness to underfunding in the province’s education system.

According to Greater Victoria Teachers Association president Winona Waldron, students in B.C. receive $1,800 less in provincial funding than the national average for education.

“Our students are funded at $1,800 less than the national average,” said Waldron. “This is a huge concern for teachers.”

“And, teachers in B.C. are the second lowest paid in Canada,” she said. “Only Quebec teachers make less and our cost of living here is substantially higher. So these are real concerns and ones we need to address.”

They all entered the building together when the morning bell rang for class.

A rally is planned for 3:30 p.m. today in front of Rob Fleming’s constituency office, the B.C. Minister of Education and MLA for Victoria-Swan Lake.

Teachers say they're at the first stage of what could become full-blown strike action.

Waldron notes that no strike action would be taken while contract negotiations were taking place. Currently, there are nine days of mediated bargaining scheduled between the BC Teacher’s Federation and the provincial government in March.

Should teachers go on strike, the job action would require the union to pass a province-wide vote, says Waldron.

“We do have a plan, which I think any union would at this point — eight months is a long time to go without a contract,” she said. “But it’s a gradual plan and our intent is not to harm our students.”

The teacher rallies taking place in the Greater Victoria School District take place on the same day as Canada’s national day of action for public education.