From cannabis to climate change, NDP convention becomes a magnet for protests 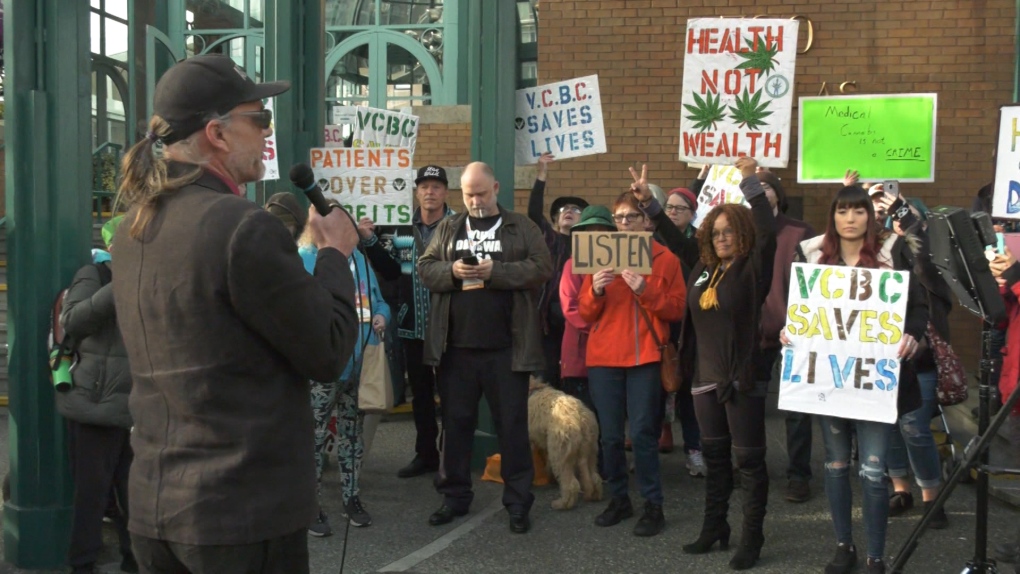 Supporters of the Victoria Cannabis Buyers Club also rallied on Saturday in protest of a recent raid on the medicinal cannabis dispensary. (CTV)

VANCOUVER - Another day, another protest outside the BC NDP convention in downtown Victoria.

On Sunday, climate protesters blocked the door to try to prevent delegates from returning after their lunch break.

This, after demonstrations on Saturday by teachers hoping to draw attention to stalled contract negotiations and overdose prevention advocates calling for decriminalization and safe drug supply.

Supporters of the Victoria Cannabis Buyers Club also rallied on Saturday in protest of a recent raid on the medicinal cannabis dispensary.

The non-profit compassion club was founded back in 1996 and is one of the longest-running unlicensed dispensaries on Vancouver Island.

Officers from the province's community safety unit, which enforces the Cannabis Control and Licensing Act, raided the dispensary on Nov. 14, confiscating its inventory and ordering it to close.

Despite the closure notice, the club reopened its doors the following day.

Outside the NDP convention, owner Ted Smith said the province's legal cannabis regulations are too strict for those who need to use marijuana for medical purposes.

"We want our provincial government to sit down and talk with us about having a smooth transition into the legal system," Smith said. "We want to be part of the legal system and comply, but only when it's in the best interests of our patients."

It's now been nearly two and a half years since the BC NDP formed a minority government with the support of the three-member BC Green Party caucus.

Though Premier John Horgan and ministers of his government routinely invoke the 16-year span that their BC Liberal predecessors spent in government, the flurry of protests outside this weekend's NDP convention reinforces the fact that the government of the day is always responsible for answering to the complaints of its citizens.

The Horgan government has also faced protests from forestry workers in recent months, and has been dealing with a surge in labour strife around the province.

Despite all of this, polling suggests the provincial NDP remains fairly popular.

The most recent publicly available poll on vote intention in a provincial election - conducted by Insights West in June - showed Horgan's New Democrats leading Andrew Wilkinson's BC Liberals among decided voters by five percentage points (35 per cent to 30 per cent).

More recently, a September poll from the Angus Reid Institute found Horgan's approval rating to be 54 per cent.

As activists and protesters continue to direct their frustration at the BC NDP, the effect on the party's support and Horgan's popularity remains to be seen.