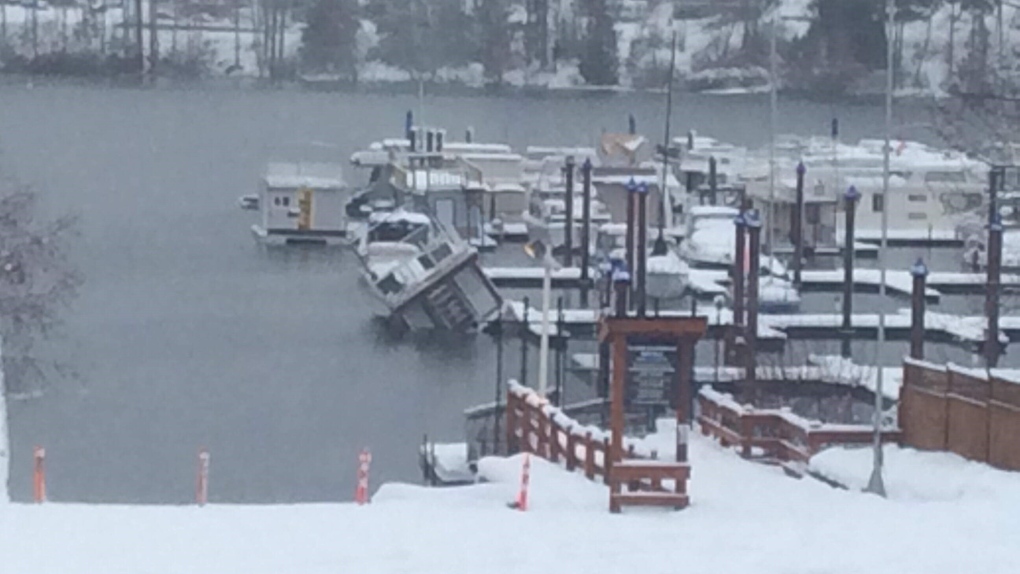 A houseboat docked at a marina on Cowichan Lake was sinking Saturday morning, after heavy snow fell overnight. (Bonnie Makowsky)

VANCOUVER -- Bonnie Makowsky woke up to a startling sight outside her Vancouver Island home on Saturday.

Out on Cowichan Lake, a houseboat docked at the marina was sinking.

"While I was watching it, a bunch of snow slid off the roof and it sunk more," Makowsky said.

She took a photo of the vessel, its left side submerged in the frigid waters, sticking out at almost a 45-degree angle.

Makowsky's not sure who exactly the float home belongs to, but she was relieved to see that people from the marina were assessing the situation. She said it didn't look like anyone was inside or in danger.

According to Environment Canada, a total of 30 centimetres of snow fell on the town of Lake Cowichan in the storm that struck Friday night and Saturday.

That's in addition to the large dumps of snow that hit the region earlier in the week.

Makowsky said it seemed to her like the weight of the snow atop the houseboat was what was causing it to sink. She couldn't be sure, though, because none of the other vessels on the water seemed to be in trouble.

"There's lots of houseboats in our marina, but this is the only one I can see that's sinking," she said. "Most people come and clear them off, and I do believe they've been clearing that one off."

She said the distressed vessel had not sunk any further into the lake since she initially observed it.