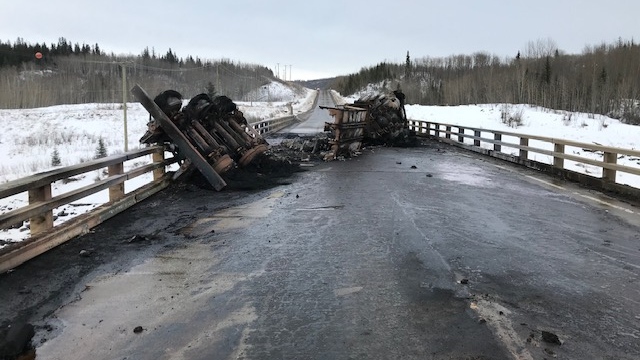 A large crane was used to remove the burned-out wreckage of the truck on Sunday and the cause of the crash is still being investigated. (BC Spill Response)

VICTORIA - About three-quarters of the 40,000 litres of crude that spilled in a fiery tanker-truck crash near the B.C.-Alberta boundary burned after the accident, and crews are now working to clean up the remainder.

Alan Stebbing, an environmental emergency response officer with the Environment Ministry in B.C., says the crash happened Saturday when the driver lost control and the truck tipped sideways on the Pouce Coupe River Bridge on Highway 49.

He says the driver escaped without major injuries and the vehicle burst into flames.

Stebbing says while the ministry's assessment is preliminary, it appears that about 25 per cent of the crude being transported spilled either on the ground or into the nearby river.

The bridge had been closed while engineers assessed its stability and the Transportation Ministry says it has been deemed safe for travel, with restrictions in place because of fire damage to the deck, railings and downstream girder.

A large crane was used to remove the burned-out wreckage of the truck on Sunday and the cause of the crash is still being investigated.

A flight over the river revealed no large spill of crude, although Stebbing says a multicoloured sheen of fuel was evident.

He says containment booms were placed around the spill site, along the river banks and over the river.

“But as we laid the containment boom into the river and got that hard river boom in place, there was a dramatic decrease in the amount of sheening that we were seeing down river.”

Stebbing says they're moving from the emergency phase to a clean-up operation.

He says crude being transported by Tempest Energy Services was from the Boundary Lake region in B.C.

Stebbing says Tempest has hired an environmental contractor that has installed wildlife deterrents to keep animals away from the site and will be conducting water and soil sampling.