But upon closer inspection, The Very Good Butcher Shop is actually carving up something other butchers wouldn’t dare touch: vegan food.

The meatless butcher shop is opening this weekend in the Victoria Public Market on Douglas Street and hopes to appeal to a city known for its environmental and health-conscious lifestyle.

“Every time someone chooses to eat plants over an animal, it’s better, for one thing, for that animal,” said owner James Davison, vegan burger in hand. “Environmentally, the U.N. is just coming out with a pretty damning report about meat consumption. We have to use less, we have to reduce our consumption so every time someone has one of these, they’re saving the planet.”

The report, released Wednesday by the Food and Agriculture Organization of the United Nations, says that diets rich in meat are associated “with higher environmental costs and higher emissions of greenhouse gases” including methane, carbon dioxide and nitrous oxide.

Davison, a classically trained chef, hopes his plant-based products appeal to more than just those vegetarians and vegans interested in saving the planet.

The butcher shop offers menu items like gluten-free waffles with barbecued pulled-jackfruit, beet-based meatballs and the company’s Very Good Burger – which is so close to the real thing that one vegetarian almost sent it back fearing it was meat, according to Davison. 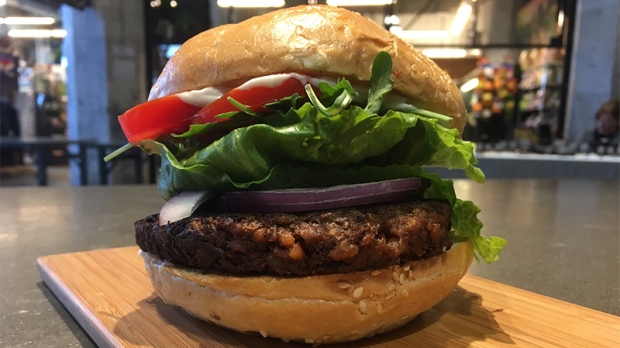 “So in here we have beets, carrot, onion, celery and garlic, that’s all the main vegetables in there, and for grains we have barley,” Davison said. “It’s all held together with wheat gluten, so it’s like a seitan base, and a mixture of spices which are my secret. The idea was we wanted it to look pretty much look like a beef meat patty, but just a hundred times healthier.”

“The more information that we get about what’s good for us, what counts as a protein, how we can include alternative sources in our diet, I think people are a lot more educated on what they’re eating these days,” she said. “We have all these different people who are coming together creating new and innovative ways to have your dinner.”

The trend is also coming about because traditional meat proteins are jumping in cost, while plants and beans are still relatively cheap.

"Beef, chicken, pork will always be there on our plates, but I think the accessibility of all these plant proteins will see some innovation in the future,” she said.

The butcher shop is kicking off its opening day on Saturday and will be providing free vegan appetizers and samples. It's also donating 10 per cent of sales to animal refuge Rasta Sanctuary and Victoria Women’s Transition House Society.

It's the first shop of its kind to open in B.C. and the second in Canada following YamChops, a vegetarian butcher shop in Ontario.