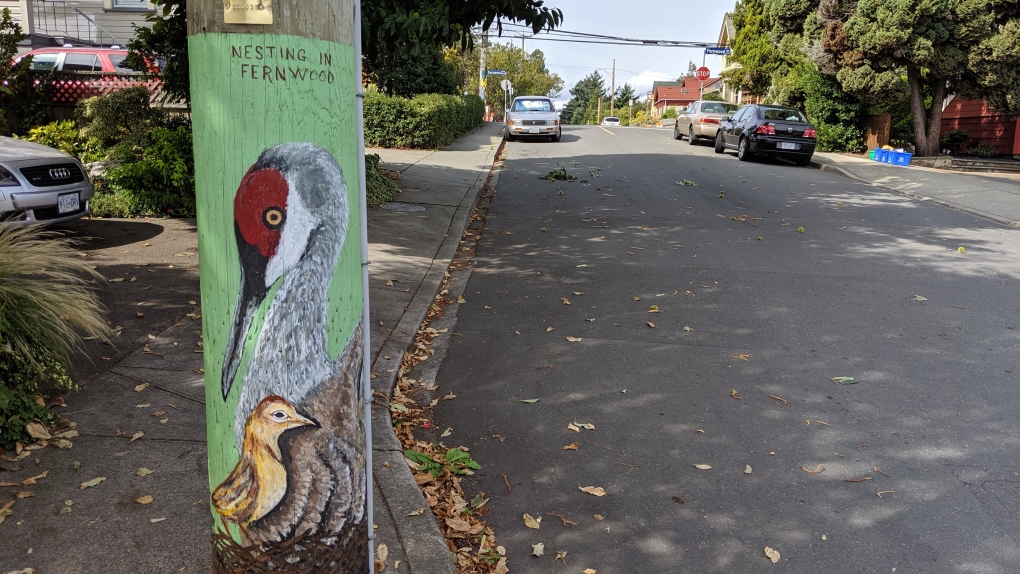 Tapping into an artistic vein, 10 years ago residents of Victoria’s Fernwood neighbourhood took transforming a community into their own hands.

With cans of paint and brushes in hand, homeowners and renters banded together and began wrapping bland power poles with whatever art crossed their minds. Life-sized poodles, carefully cultivated sunflowers and native birds were etched onto BC Hydro poles dotting the neighbourhood.

But, a community which used the painting project to help transform from a rough-and-tumble region to an up-and-coming island enclave will be the last to paint with reckless abandon.

BC Hydro has announced, after several failed pilot projects, that it will no longer allow power poles to be adorned with community art.

“The quality of the paint can degrade the pole,” BC Hydro’s Ted Olynyk told CTV News on Wednesday. “It also covers defects that we look for.”

Hydro says residents of Fernwood were never officially given permission to paint, but the power company agreed to turn a blind eye.

Eventually other communities began asking if they could begin painting. BC Hydro allowed artists on Gabriola Island and the city of Nanaimo to start using the poles as a canvas, but cracks quickly began to show.

“We got calls that people didn’t like it,” Olynyk said.

On Gabriola, many residents told BC Hydro that painting the poles actually ruined the natural look of the roadside and wanted them returned to a natural wood state. In Nanaimo, a volunteer artist herself said the poles were the wrong place for her art and asked that the works be erased.

BC Hydro is clear that poles that are already painted will not be tampered with, unless they receive complaints. The major change to policy is that BC Hydro will no longer turn a blind eye to currently unpainted poles being used as an artistic outlet.

In Fernwood the shift hits hard.

“It has transformed Fernwood into a visual wonderland telling a story of what the people of Fernwood care about,” said Beth Threlfall in a Facebook post.

Therlfall, who has been involved in several Fernwood painting projects, thanked everyone who has been a part of the community movement for the past 10 years.

“Always remember using our imagination can change the world,” she wrote.

Power pole art is not unique to Fernwood. Communities like Cook Street, Fairfield and James Bay have similar urban displays. But, in a place where the artistic movement arguably caught fire, Fernwood will likely be its last true bastion.