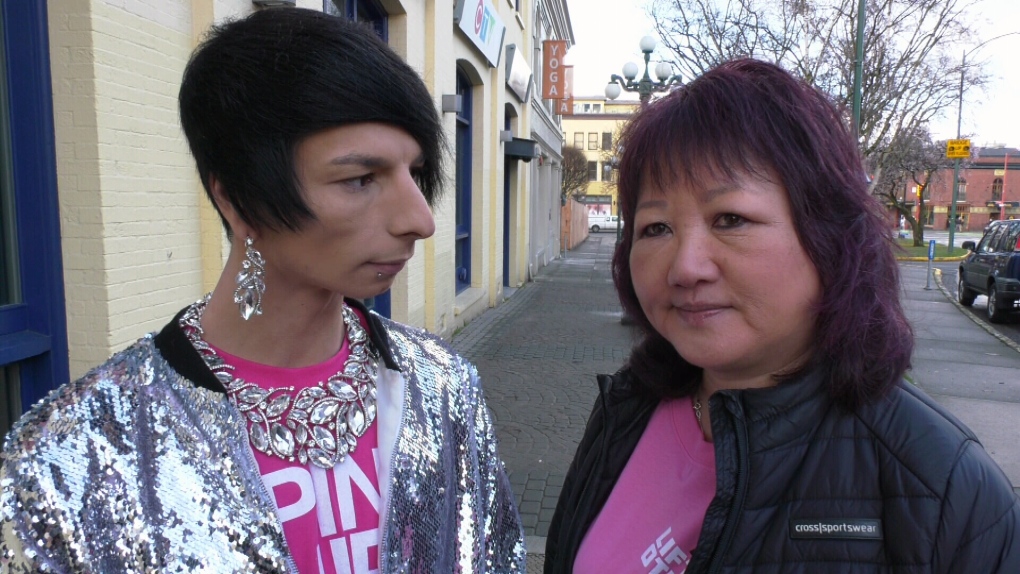 Amanda Todd's mother, Carol Todd, speaks with friend Justin Preston, who reached out to her to share his experiences with bullying after her daughter's death in 2012: (CTV News)

VICTORIA -- As the anti-bullying initiative Pink Shirt Day sweeps across Canada Wednesday, the mother of Amanda Todd, a B.C. teen who took her own life after being bullied online, is speaking about why it is important for everyone to support one another.

Pink Shirt Day started in Nova Scotia in 2007 when students at a high school wore pink shirts in support of a classmate who was bullied for wearing a pink shirt days before. Since then, schools across the country have marked Feb. 26 as an anti-bullying day.

"It's about kindness, it's about respect," said Amanda Todd's mother, Carol Todd, about Pink Shirt Day. "We need to talk about how to be a good supportive friend, how to be kinder, how to exude good social emotions and build the relationships that are needed in order to build a safer community."

On Wednesday, Todd told CTV News that she hopes her daughter's story and Pink Shirt Day will help inspire victims of bullying to speak out, and for others to rethink how they treat one another.

"My message to those that are being bullied and victimized is to tell someone, to talk to someone and to get the support you need – that it is not your fault," she said. "And to those who are doing the victimization, who are actually being the perpetrators, I would say we need to come and talk and sit down and find out why these behaviours are happening."

"Everyone's got a story and those stories create the lives that we have and so if you are someone that victimizes someone else please stop," said Todd. "Let’s talk, and let’s have a shift in your behaviours."

Todd says that while the loss of her daughter is painful, it is heartening to hear that new generations of children are still learning about Amanda's story and the dangers of online bullying, which has only increased since the time of her daughter's death in 2012.

She says that recently, she received a message from a student saying that her school had just learned about Amanda and her experiences with bullying. "She said, 'I realized that I was three-years-old when it came out,'" says Todd.

"So her story is still happening but it's a new generation of kids that are learning about Amanda's story that continues to talk about digital safety and online safety," she said.

"I’ve lost my daughter, and I miss her terribly, but her presence is still out there among us, and so I’m blessed with that."