VICTORIA – Esquimalt residents woke up to the sounds of people screaming and the sight of smoke early Wednesday morning.

Three homes were destroyed and a fourth was damaged after a fire tore through an Esquimalt-area mobile home park on Songhees land near Craifglower and Garthland roads.

“Devastating fire here for at least three families this morning and we will try to figure out a cause later today,” said Paul Hurst, View Royal Fire Chief.

Fire crews received reports of three units ablaze at the park at around 5:40 a.m.

Hurst said the fire started in one unit and spread rapidly.

“They are so tightly packed together we get one unit and it spreads horizontally very quickly,” said Hurst. “It didn’t help with the propane tanks, initially there were two 200 pound tanks venting and it was just spreading the fire rapidly and crew had to take that into account as they tried to attack the fire.”

Firefighters arrived to find multiple trailers on fire at about 5:40 this morning.

Fire chief Paul Hurst tells @CTVNewsVI it started in one unit and spread to the others. pic.twitter.com/1Z47baa7qw

Neighbours in the tight-knit community were woken up to a chaotic scene.

“First I heard someone yelling, like really frantically yelling and then I looked out my bedroom window and there were flames coming up,” said resident Angela Elder.

She watched as two men were able to get out of their trailer just before it went up in flames.

An elderly couple living in one of the residences was able to get out and Elder brought them into her home to keep them warm.

“They were just devastated, walking around with no shoes on, no coat, no nothing,” said Elder. “They lost everything. The gentleman next to them has also been taken to the hospital.”

Hurst said four people were taken to hospital and the extent of their injuries varies.

“We are looking at smoke inhalation, we had one cardiac issue, we had a collapse here in the street,” said Hurst.

Two other homes were damaged in the fire.

A GoFundMe campaign has been created for the elderly couple displaced by the fire, who do not have family here to support them. Donations can be made here.

Meanwhile, residents say everyone has been accounted for and that all pets were able to get out safely.

While the cause of the fire is still under investigation, Hurst says that it is not being considered suspicious and that it may have been started by a space heater. 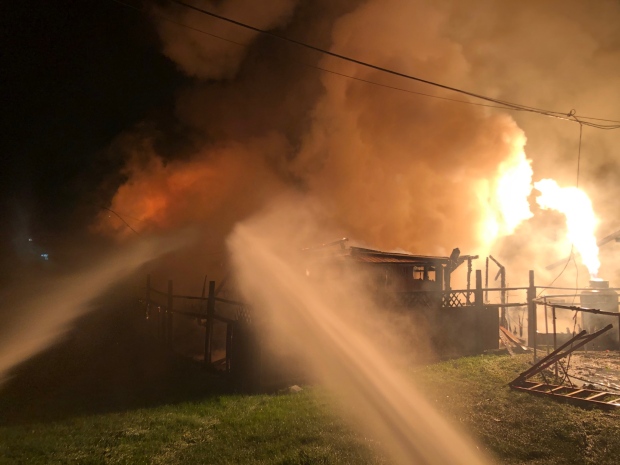