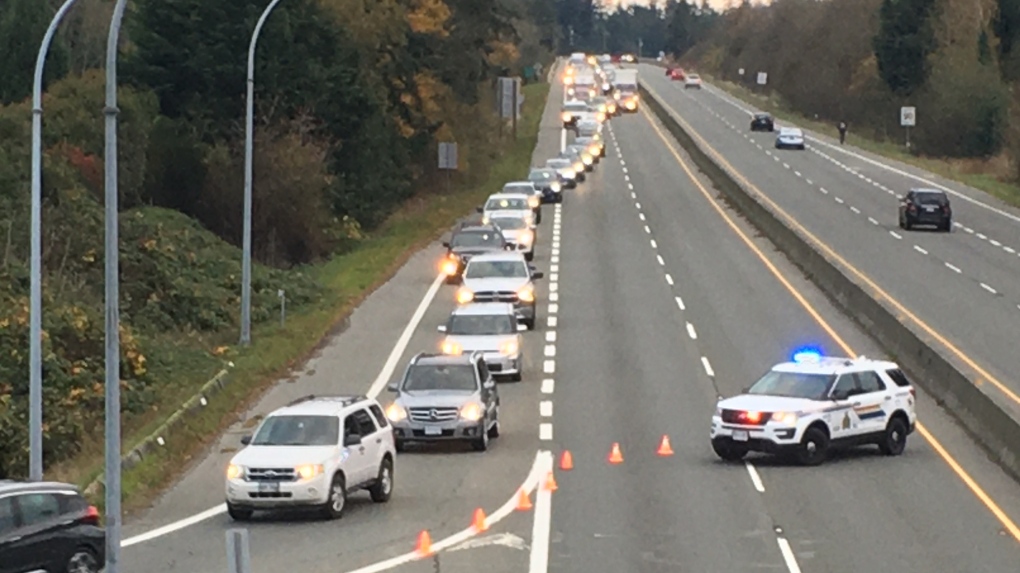 A long line of detoured traffic is pictured on the Pat Bay Highway around 4 p.m. Wednesday: (CTV News)

VICTORIA -- A man has been taken to hospital for what police believe are minor injuries following a crash on the Patricia Bay Highway in North Saanich on Wednesday.

The crash occurred just before 4 p.m. on the highway near Amity Drive, heading northbound.

Provincial RCMP say that a police officer was in the area conducting traffic enforcement when they spotted a taxi they believed was speeding.

Mounties say the officer "stepped out" to pull over the taxi when a vehicle in front of the cab stopped suddenly upon seeing the officer. The taxi then rear-ended that vehicle.

Police say the driver of the first vehicle left the scene and did not seek any treatment from paramedics who responded to the crash. Meanwhile, the driver of the taxi was taken to hospital for what police believe are minor injuries.

The crash caused traffic to back up along the highway, as the northbound lanes were blocked off for police to examine the scene.

Northbound drivers were being directed onto a detour along Amity Drive and Lochside Drive after the collision.