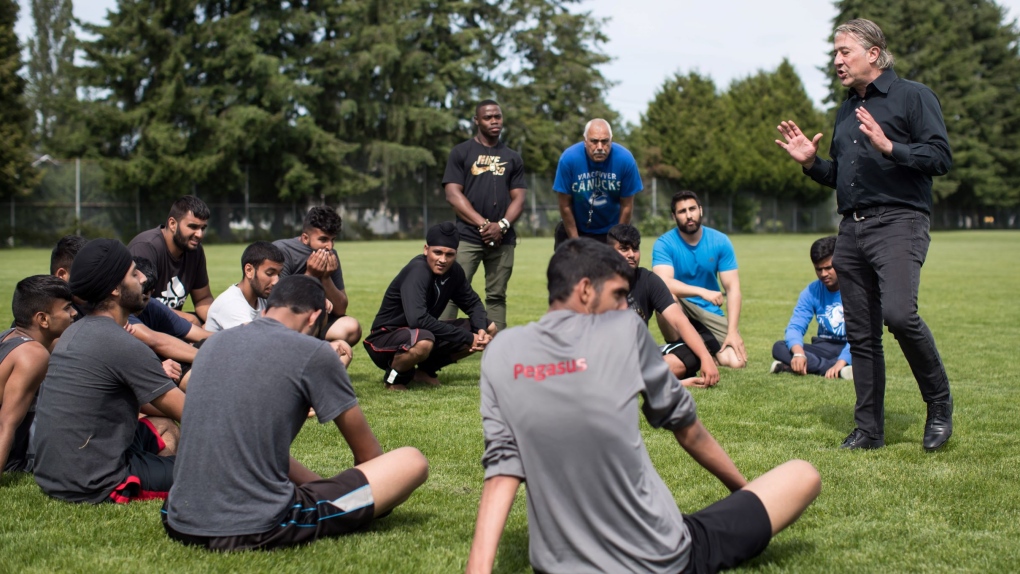 Former Hells Angels member Joe Calendino, right, addresses students taking part in kabaddi practice at L.A. Matheson Secondary School Ã where he facilitates an after-school program for students in Surrey, B.C., Tuesday, June 4, 2019. Kabaddi is a contact team sport where players run into the opposing side of a field or court and attempt to tag out as many opponents as they can and return to their side without being tackled. THE CANADIAN PRESS/Darryl Dyck

Police officer Keiron McConnell had been on the job four months when a call crackled over the radio about a stolen vehicle.

The driver was arrested after a short chase, but when McConnell was told the young man was a gang member, it shattered his understanding of what that meant.

“Everything I thought about gangs up to this point had kind of come from the movies 'Colors,' 'Boyz n the Hood,' that kind of stuff,” McConnell said.

“This young fellow lived on the west side of Vancouver, mom and dad still lived in the house, they were wealthy by 1990s standards, his siblings were successful in school. So it was like, what is it about this kid that got him involved?”

The question plagued McConnell as he watched the pattern of seemingly privileged, middle-class young men choosing a life of crime repeat itself.

About 15 years after that arrest, he explored the question of what makes British Columbia's landscape so unlike any other through a PhD.

Established wisdom, he found, aligned with the stereotypes he'd carried into the job. Traditional gang members in cities like Chicago are young men born into poor neighbourhoods without any options - a rational response to irrational circumstances.

That's not always the case in British Columbia.

“In B.C., gangs are, generally speaking, an irrational response to rational circumstances,” he said.

Gangs in B.C. are not a new phenomenon.

The outlaw McLean gang was executed in a group hanging in 1881 after terrorizing the Kamloops community and killing a police officer. Newspapers in the 1940s documented clashes in Vancouver between military personnel and flamboyantly dressed zoot suitors on Granville Street. And the aptly-named “park gangs” staked territorial claims to the city's parks in the 1960s and 1970s.

The notorious Hells Angels opened their first B.C. chapter in 1983 and would come to dominate organized crime across Canada by around 2000. Police consider the outlaw motorcycle gang a “top-echelon” criminal organization like the Mafia, operating in more than 20 countries.

Others like the United Nations, Red Scorpions and Brothers Keepers have emerged at the mid-level and the province's anti-gang agency says much of that structure remains in place today.

“The main conflicts are still there, however, you see now the gangs are more loosely tied,” said Sgt. Brenda Winpenny, spokeswoman for the Combined Forces Special Enforcement Unit, the provincial anti-gang agency.

Also distinctive today is how quickly allegiances shift and the number of lower-level “cells” or unnamed subgroups emerging, she said.

It makes defining and quantifying the number of gangs difficult. The number of gangs controlling criminal markets listed by the anti-gang agency grew from a handful in 1980 to 188 by 2011, but there's no available estimate today.

The Criminal Code defines a gang as a group of three or more people with the main purpose of committing or facilitating serious offences for financial benefit. But many so-called “gangsters” don't identify with the word.

“A lot of these kids, they're not seeing themselves joining the gang,” McConnell said.

If you're selling illicit drugs though, you're associated, he said.

In contrast to the military-like hierarchy of the Hells Angels, McConnell likened the structure of many gangs today to a “bag of marbles.” They are not tied to particular geographic areas but move location and shift loyalty according to business opportunity.

And with that has come more public violence.

When Canada's homicide rate reached 660 in 2017 -the highest in almost a decade - Statistics Canada attributed part of the spike to gang-related violence and shootings, singling out British Columbia as a hot spot. The province saw the homicide rate rise by 32 per cent that year.

The homicide rate in B.C. levelled off again in 2018 but gang-related violence continues to represent 37 per cent of all killings in the province.

“In the, quote, 'good old days,' when the Hells Angels were in control of the whole lot, those acts of violence were minimal because they would go and talk to people about behaviour and about expectations and about attitudes, and if you did not listen carefully there were consequences,” said Rob Gordon, a criminologist at Simon Fraser University in Burnaby, B.C.

“There's no subtlety anymore. I'm being a sentimentalist.”

Joe Calendino was lying on a prison floor, emaciated and sick from drug withdrawal symptoms when he says he hit rock bottom.

He was a member of the Hells Angels' infamous Nomads chapter when he was busted selling $10 worth of crack cocaine to an undercover cop.

It was the moment he began turning his life around, which he says was possible because the outlaw motorcycle club was ready to cut him loose.

But the gang landscape has shifted so dramatically in the 10 years since then that today's youth won't have the same second chance, Calendino said.

“There's no rock bottom anymore, it's a grave,” he said.

Calendino now works with youth in gang prevention and intervention through his non-profit Yo Bro Yo Girl Youth Initiative. The organization offers programming in classrooms, after school and during school breaks that aim to keep kids busy, active and empowered with support from positive role models to choose a healthier life path.

When he looks back on his early entry into criminal life, beginning with drugs in Grade 8 and high school fights with other kids, he said the stakes were different than those facing the kids today.

“We didn't go around shooting each other. We got into fights, a man or boy got beat up and it was over, it was done. You may have fought someone 10 to 15 times but you never ever thought of picking up a gun and going to shoot him,” he said.

Vancouver Police Chief Adam Palmer told reporters in January 2018 that the region was experiencing a swell of gang-related violence unparalleled in the past 10 years after an innocent 15-year-old was killed by a stray bullet while his family was driving past a shootout.

Several groups are at odds over drugs and killing one another, Palmer said.

For McConnell, today's middle-class gangsters aren't too different from the young man from west Vancouver he arrested in the 1990s.

Two years ago, he was speaking with a “wealthy” father of two young men at risk of violence.

“I pleaded with him to use his wealth to get his kids out of the country and he didn't. And his one son was shot and killed in Surrey and at the same time, his other son was shot five times.”

Officials say many of the middle-class young men stepping off school and career paths to pursue criminal businesses see it as a legitimate career opportunity.

They begin working low level “dial-a-dope” lines, where users can order drugs by phone for delivery or meet up, with the promise of growth.

“It's the pizza delivery service of drug dealing,” Winpenny said, adding that it's also the riskiest position in the line because it means dealing directly with addicts and acting as an easy target for rival gangs.

“These young kids are being recruited into this promise of making some easy money,” she said. “But the higher ups are sort of insulating themselves from that violence.”

It's the entry point into a much more complex organizational structure. A 2018 report by an anti-gang task force in the Vancouver suburb of Surrey found many gangsters are profit driven and operate enterprises similar to traditional businesses. Gangs in B.C. are more sophisticated than in other parts of Canada and some even require new members to pay for training, it says.

Their product, primarily, is drugs.

Historically, British Columbia's “porous” ports, with no dedicated patrolling force, made it an attractive hub for the international trade, Gordon said. And its temperate climate allowed it to become a major producer of marijuana, for which a thriving black market persists despite legalization last October.

Newer products - the deadly opioid fentanyl and its analogues - now present an even more lucrative business opportunity. The extremely concentrated painkillers are cheap to produce in China and even easier to transport than other drugs, since they can be ordered on the dark web and sent by regular mail.

Chief Const. Mike Serr of the Abbotsford Police Department, who also chairs the drug advisory committee for the Canadian Association of Chiefs of Police, said in May that quantifying the profitability of opioids is difficult since they are typically cut with other drugs rather than sold “pure.”

For comparison, he said one kilogram of pure heroin typically costs $70,000 and would be added to a cutting agent to produce two kilograms worth of drugs for street sales.

One kilogram of fentanyl costs roughly $12,500 but can be mixed with 100 kilograms of a cutting agent for street sale because it's so potent. Estimating that profit is difficult because it may be sold under several different drug names with different concentrations, and in much smaller quantities than one kilogram at a time, but $1 million isn't out of the ball park, he said.

When you consider analogues like carfentanil are significantly more concentrated than fentanyl, the profit margins are exponential.

“If someone said 10 years ago, can you make the perfect drug, carfentanil and fentanyl would be, unfortunately, the drug because it's cheap, it's much easier to import, it's easier to source,” he said.