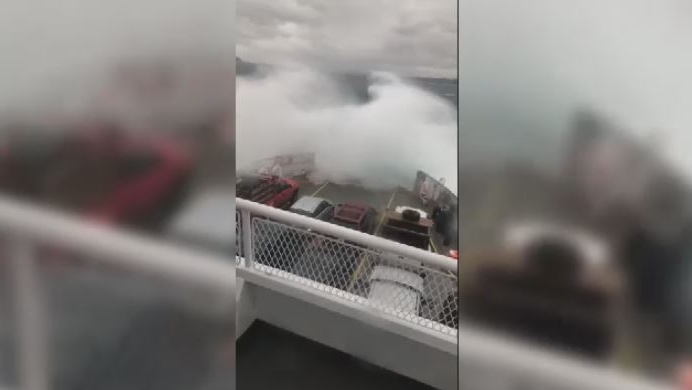 A still from a video shows waves about to crash into vehicles on a choppy BC Ferries ride from Quadra Island to Campbell River Wed., Jan. 2, 2019. (Courtesy Bubba Muldoe)

Bubba Muldoe had his smartphone recording as massive waves crashed over a deck and onto vehicles during a rough BC Ferries sailing Wednesday.

Muldoe and his family were on a noon sailing from Quadra Island to Campbell River when a storm stirred up choppy waves on the water.

"We were just getting off Cortes [Island] and that was a little bit of a rough ride as well," Muldoe told CTV News. "You could see out on the water it was looking pretty rough, so we were a little bit worried."

They went inside a closed area on the open-deck ferry and when they came outside, they saw waves start to slam the side of the boat.

"It rumbled the boat a little bit and sure enough, a big wave comes over the front," he said. "Everybody was a little bit worried, but everyone was in good hands."

As a long-time commercial fisherman, Muldoe said he's experienced rougher waters but his kids were feeling "a little bit woozy."

"I haven't been on a ferry ride like that in a long time, so it was exhilarating," he said.

Environment Canada issued rainfall and wind warnings for parts of Vancouver Island earlier in the day, saying winds of up to 70 kilometres an hour would hit coastal sections of eastern Vancouver Island.

The wild weather comes nearly two weeks after a windstorm devastated much of coastal B.C.

More than 750,000 customers were left without power in what has since been deemed the most destructive storm in BC Hydro history.