A large section of a strip mall in Parksville, B.C., went up in flames Wednesday night, taking out four businesses.

Firefighters from multiple departments attended the blaze just after 10:30 p.m. at the Parksville Heritage Centre at 1209 Island Highway East. 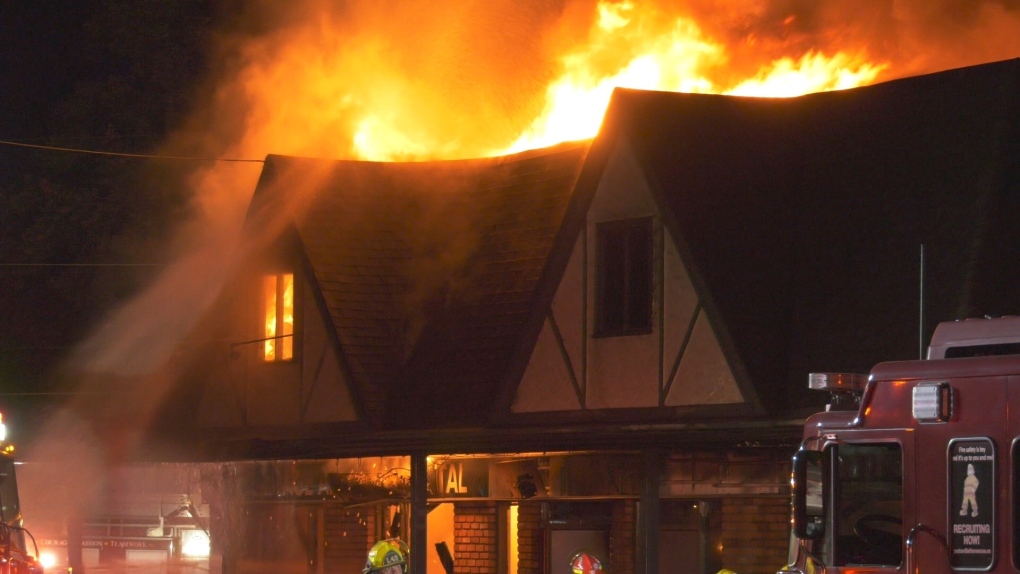 "When we arrived, we found smoke out of all the eaves of the structure on the northeast side," said Parksville fire Chief Marc Norris.

The flames quickly spread through the roof and the trusses dropped into the businesses below as they burned. The fire chief says the building was built in the 1960s or 1970s and has been renovated many times.

"This is quite an old building, has several ceilings in it," he said. "The crews were unable to get to it, the fire spread through the loft area and the truss bases."

Norris says there were no fire separations between the units. He believes the fire started inside one of the building’s two restaurants.

Hydro and gas was disconnected from the building and Norris says two propane tanks were removed from the area. Crews also had to wade through a large knee-deep water puddle that filled a portion of the parking lot.

The businesses were unoccupied at the time of the fire.

Two cats belonging to the Heritage Animal Hospital were rescued from the blaze. The cats are owned by hospital staff and there were no other pets in overnight care at the time.

Staff at the hospital were on scene Wednesday night trying to figure out how they were going to continue operating on Thursday.

Two restaurants— the British Bobby Restaurant and LaBelle Parksville – were also destroyed in the blaze, along with the offices of the Parksville Qualicum Beach News.

Teresa Bird, the newspaper's publisher, says she is relieved nobody was hurt in the blaze.

"Obviously we haven’t been able walk through the building yet but we know that all of the electronics and everything, of course, are destroyed," Bird said.

The staff of 10 who worked in the building will temporarily have to work remotely while new premises are located. Bird said community members have already come forward with offers of business space.

"We’re actually able to work remotely to put the paper out this week so we will have a paper this week. Everybody can work from their laptops. Most of our systems are now online," she said.

She said the offices were also used to produce provincewide podcasts and that the audio studio was destroyed.

Crews prevented the fire from spreading to the other portion of the mall, which is anchored by the Serious Coffee shop.

Firefighters remained on scene Thursday morning to determine the cause of the blaze.

An earlier version of this story incorrectly said the offices of the Vancouver Island Free Daily newspaper were also destroyed in the blaze. In fact, the newspaper is no longer produced on these premises.