They may be an endangered species, but a few Vancouver Island marmot pups appear to be thriving in new footage captured by a remote surveillance camera.

In it, three healthy-looking marmot pups are seen play-fighting on a lush mountainside.

The foundation says it's typical behaviour for marmot pups and the video shows that they're in good condition.

The colony where the footage was taken is home to 27 marmots, including 12 pups.

The Vancouver Island marmot is considered Canada's most endangered mammal, according to the foundation, and was narrowly rescued from the brink of extinction thanks to conservation efforts.

Last year, it marked a huge milestone when it release the 500th marmot into the wild on Mount Washington – a sharp increase from 2003 when there were fewer than 30 left. 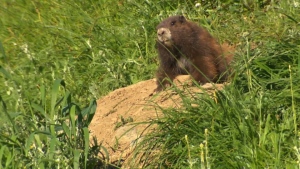