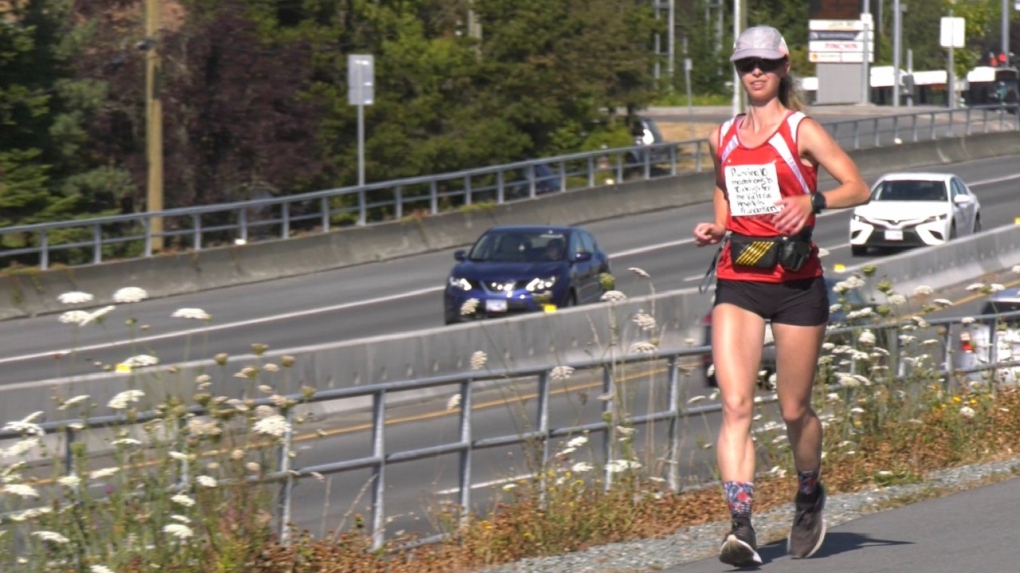 Wednesday was day six of Yana Hempler’s effort to run 10 marathons in 10 days to raise money and awareness for the Victoria Hospitals Foundation; and she didn’t disappoint. (CTV)

VICTORIA -- Wednesday was day six of Yana Hempler’s effort to run 10 marathons in 10 days to raise money and awareness for the Victoria Hospitals Foundation; and she didn’t disappoint.

The Victoria runner was feeling strong after finishing Wednesday’s marathon and says it was easier than the first few days of pounding the pavement. Her time was 4 hours and 49 minutes – a comfortable pace to avoid injuries and dehydration.

Starting at 5 a.m. is helping Hempler beat the heat and she is confident she can finish the next four marathons.

Friends and community supporters have been out joining her on the trail and keeping her mind off of the running, which helps pass the time faster.

Hempler has raised more than $4,000 of her $10,000 goal for the Victoria Hospitals Foundation’s critical care unit; but needs more support to go the distance.

“I believe in this community, I know this. I’m a little more ahead with the marathon than the fundraising right now,” says the charity marathoner. “If I’m going $1,000 per marathon per day kind of thing. Right now I believe the fundraising is falling behind a little bit, but I am hoping that will change.”

Hempler was inspired to do the run by what she calls “our health-care heroes” - the doctors, nurses and other healthcare professionals who work in Vancouver Island’s hospitals and care facilities.

Last year, one of her longtime friends, Ian Simpson, was in the hospital in critical care fighting for his life. Hempler saw first-hand how the medical staff worked hard to help him recover. She knew then she wanted to do something to give back to the staff and patients at the hospital. That’s when she discovered the Victoria Hospitals Foundation, a charity that raises funds for important pieces of equipment that contribute to better patient care, faster diagnosis and more efficient treatment on the lower island.

If more than $10,000 is raised before all 10 marathons are complete, Hempler says she will run an 11th marathon on Monday.

You can get out and cheer her on for the next four days as she runs back and forth on the Galloping Goose trail between Saanich and Tillicum Roads. She is usually wearing red, so should be easy to spot.

If you are feeling energetic, she says you can also support her by biking or running along side her for some of the daily marathons.

You can support Hempler’s efforts to raise money for the Victoria Hospitals Foundation by donating at canadahelps.org.