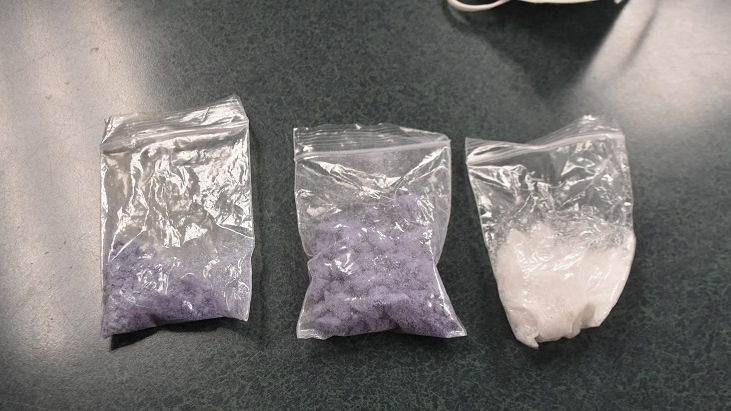 Some of the drugs found during the arrest are shown: (West Shore RCMP)

VICTORIA -- A man wanted on multiple outstanding warrants was arrested in Langford last week, leading to the discovery of additional illegal items.

West Shore RCMP say that following covert surveillance, officers tracked down the man to a car parked in Langford on Jan. 8. There, he was sitting inside of the vehicle with another male.

Officers then approached the man to arrest him for several outstanding warrants, including possession of a concealed weapon, theft and driving while prohibited. As Mounties were arresting him, they found he was wearing body armour and had a mix of illegal drugs on his person.

"The 31-year-old suspect was arrested for his outstanding warrants, breaching court ordered conditions to not possess any ammunition as well as possession for the purposes of trafficking,” said Const. Nancy Saggar of the West Shore RCMP in a release Thursday.

“He remains in custody awaiting a court hearing,” she said.

Meanwhile, the other man inside of the car was arrested for “carrying a concealed weapon” at the time. Police say they found a replica firearm on his person during the arrest. The 31-year-old passenger from Sooke was taken into custody and later released on an undertaking.