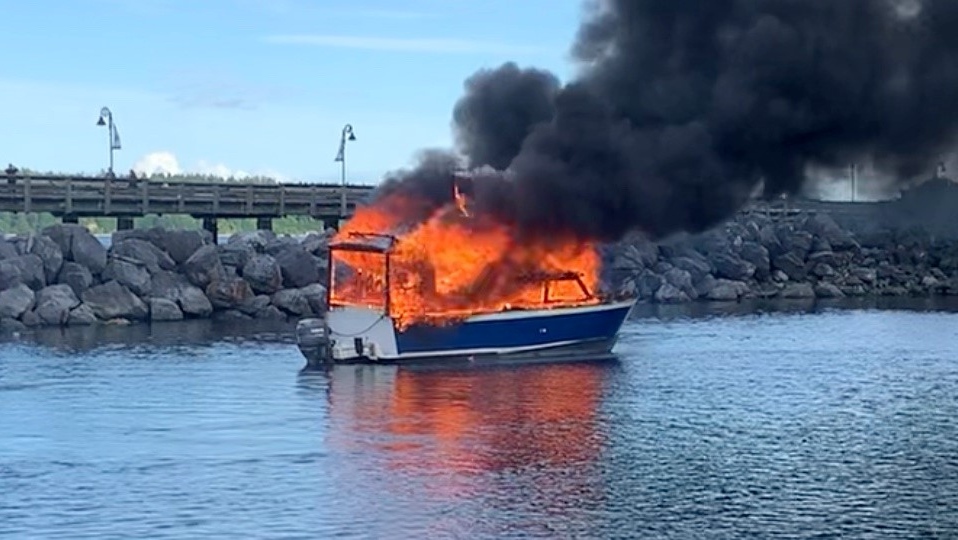 One of the two boats that caught fire at a Campbell River marina is shown: (Corey Wiens)

CAMPBELL RIVER -- A man is homeless but safe after two boats he owns, including one he was living on, were destroyed by fire and sank in Campbell River's Discovery Pier Marina Tuesday night.

Captain Stewart Dumont of the Campbell River Fire Department says the 23-foot and 16-foot vessels were on berth five of the marina when they went up in flames.

"Both fully involved at the time of the call, we had about 18 different boats that were in an exposure issue so we had a few obstacles to overcome but we adapted," Dumont said Wednesday.

It is believed the man was a recent arrival to the marina and experienced mechanical issues with one of the boats' motors.

"He kept himself away from the flames and was uninjured," said Dumont. "We activated Emergency Social Services personnel to find him some accommodations for the evening."

Corey Wiens is a tugboat operator who was walking towards his truck at the marina when he saw the smoke and flames. He says the boats became fully engulfed within about 20 seconds.

"There was tons of flames and then the propane tanks exploding, it was like someone shooting a shotgun in the harbour," Wiens said.

"Fire is a number one fear when you’re out there," he added. "Definitely it was an eye-opener to see how quick it took it up, it was fast. Hopefully I never see that at work."

Dumont praised the efforts of two boaters at the marina for their assistance in the incident, including Campbell River Marine Assist, who moved the burning vessels away from other boats, and former mayor Roger McDonell who assisted with his vessel.

McDonell says it was just by luck that he was in the area and noticed the plume of thick black smoke.

"Campbell River Marine Assist had a line on the two boats that were on fire. They were able to pull it away from the dock initially but the line that they had tied on burnt, so it was now drifting with the wind blowing back towards the boats in the marina," McDonell told CTV News.

He then started his boat and with the assistance of a firefighter he had allowed onboard the pair were able to maneuver the burning vessels into the middle of the marina.

McDonell says it appears there were issues with the marina’s on-site firefighting equipment.

"Generally they go from being a dry system in the winter for the freezing to being a wet system usually mid-March, late-March," said McDonell. "We did experience some trouble, I can’t speak on exactly what happened there."

The remains of one vessel were secured to the marina’s breakwater while the second one sank and was surrounded by booms to try to contain debris coming from it.