An early morning fire Tuesday has destroyed a portion of a motel in Courtenay, B.C., used for supportive housing.

Crews were called to the Travelodge Motel shortly after 3 a.m. and found fire coming out of two upper-floor units when they arrived.

“Within two minutes it was all gone, the roof, everything was just flames,” says Amber Hiltz, a tenant at the motel.

Hiltz says people living in the motel were alerted to the fire by one of the occupants just prior to the fire alarm being activated.

“There was a gentleman out on the deck upstairs and he was screaming that there was a fire and my friend jumped on the phone in my room and called 911 and the office to get them coming,” Hiltz says. 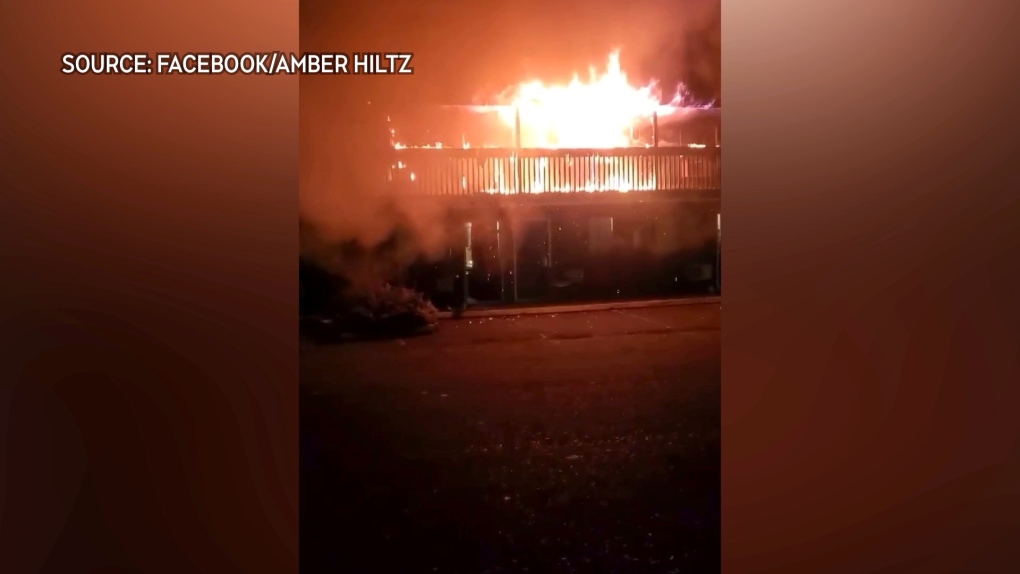 She says the fire appears to have originated in a chair in one of the units.

“The guy said he was in the bathroom and he came out from peeing and the chair was on fire and it went from just a tiny little dot,” she says. “It was up within four minutes. It was totally engulfed all the way around.”

She says someone attempted to use a fire extinguisher on the blaze before fire crews arrived.

“We’ve got BC Ambulance, RCMP, Emergency Support Services and the Comox Fire Department here with mutual aid to help us out with the fire,” he says.

One man was pulled from a unit next to the active fire and was rushed to hospital with undetermined injuries.

“Did not appear to be (burned), appeared to be more shook up than anything but he is in the care of BC Ambulance Service,” MacDonald says.

A further investigation is expected to take place later Tuesday to determine the cause of the fire.

“No idea as to how it started, it will be quite some time before our investigators will be on scene,” MacDonald says. “We’re still in the process of overhauling the fire and trying to make sure it hasn’t spread to any of the other units.”