Comox Valley Ground Search and Rescue (SAR) volunteers were called to the lake near the Cumberland Campground after a man, believed to be in his late 20s, fell onto the ledge and became trapped there. 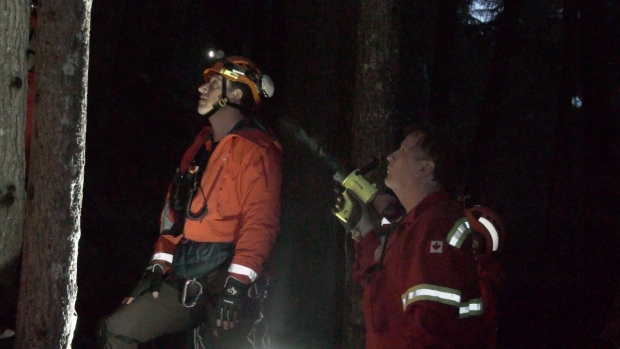 SAR rope team leader Marc Lyster says the man became lost after walking from the David Lake Main towards Comox Lake. While walking in the area, he started running into difficulties.

"He slid down a bank and he had about a four-foot fall onto the ledge that he was on,” Lyster said.

“It was probably about another 30 feet down from that so it was very good that he stopped on that ledge.”

The man began yelling for help, which caught the attention of Patrick Nixon, who found the trapped man alongside two French exchange students who were on a hike in the area.

"Pretty much as soon as I got out of the car I heard somebody yelling for help,” said Nixon.

“I didn't really know where it was from. I couldn't tell if it was actually somebody yelling for help and I heard it again and it was for sure,” he said. 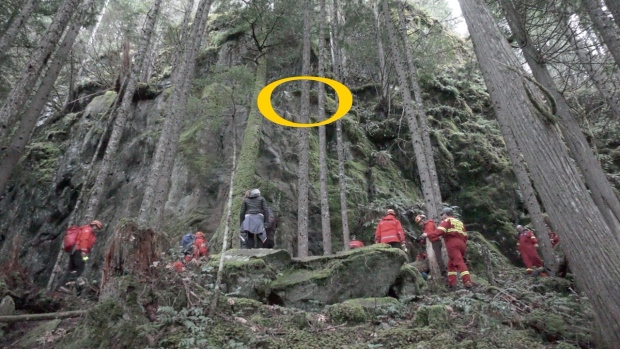 Nixon initially thought it was one of his friends pulling a prank, but then he found the man in trouble.

"He seemed a little bit concerned but he wasn't hurt or anything, he was just kind of stuck up there,” he said.

Nixon called 911 and Cumberland firefighters were initially dispatched for the rescue. The fire department then called in the SAR volunteer search team, who have more specialized training for such incidents.

When SAR arrived, a team member was able to climb part way up to the trapped man. He then threw a rope from one ledge up to where he was stuck and then passed gear up to him that aided in the rescue.

Search and rescue volunteers then helped the trapped man rappel down the slippery cliff to the ground below, where he was taken to an awaiting ambulance to be examined.

Lyster says there was not much room on the cliff and that conditions were not favourable.

"In the summertime, you can walk around on it but with this rain in the wintertime it was very slippery,” said Lyster.

“There was one little ledge that he was able to sit on and he stayed put, which was perfect".

It was the type of scenario the search volunteers often train for.

"Everything went smooth, the rope team did great,” said Lyster.

“We had a practice [Tuesday night] on mechanical advantages practicing with ropes and knots,” he added.