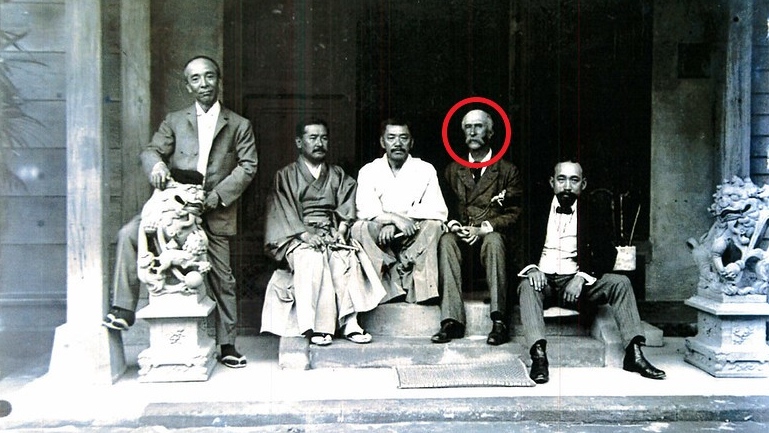 The Royal BC Museum says one person has been identified after the museum received a box of old photographs simply labelled "Brentwood Bay" by an anonymous donor.

On July 23, the museum turned to the community to try to identify the people in the seven photos, noting that the "Brentwood Bay" label could mean anything from the location of where the photos were taken, where the donor was from or where the subjects were from.

On Friday, the museum said a prominent entrepreneur, Thomas Blake Glover, had been identified in one of the photos.

According to the museum, Glover was a Scottish merchant who moved to Nagaski, Japan in 1859. He moved to the city to manage the office branch of a British trading house, says the Royal BC Museum (RBCM).

During his time there, he worked with the founders of Japanese company Mitsubishi, including brothers Yataro Iwasaki and Yanosuke Iwasaki.

The museum says the other four men in the photo have not yet been identified, though they could be colleagues of the Iwasakis.

"We want to thank everyone for their patience. While we’ve suspected for some time that Thomas Blake Glover was one of the figures in the photographs, we needed to independently corroborate this idea to be certain," said the museum in a social media post Friday.

The museum believes that the photo was likely taken at Glover's home in Nagasaki, which has gone on to become a park and tourist attraction.

The RBCM adds that the lion statue shown in the left of the photograph, called a "komainu" in Japanese, may be a precursor design for the logo of Kirin Beer, which Glover "played a role in founding with the Iwasaki family."

"Thanks to additional community sleuthing, we now have strong leads to guide our next steps, which includes researching how these photos came to be on South Vancouver Island and, ultimately, at the museum."

We're calling for community support to solve a true museum mystery! These images were anonymously donated to @BCArchives. They arrived in a box labelled "Brentwood Bay," but no other information about them was provided. (1/3) pic.twitter.com/6duxjWEiPn

The boyfriend of Gabby Petito, whose body was found at a national park in Wyoming after a cross-country trip with him, was charged with unauthorized use of a debit card as searchers continued looking for him Thursday in Florida swampland.

British actor Tom Felton, known for his portrayal of Draco Malfoy in the 'Harry Potter' movies, collapsed while playing a celebrity golf exhibition Thursday at the Ryder Cup.